The Couple Who Knew F- All 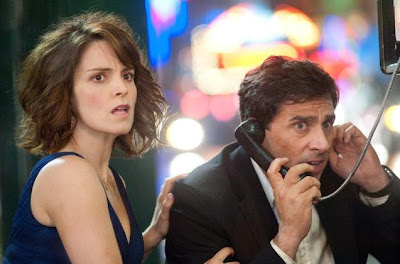 “You took someone’s reservation? What is wrong with you people?!”

An impressive roster of big name faces game for a laugh – will.i.am, Mark’s Wahlberg and Ruffulo, James Franco, Mila “Meg Griffin” Kunis, that screeching jokester who ruined ’Til Death (J. B. Smoove), to name but a few – pop up for all of a scene or two apiece, but this is undeniably the Fey and Carrell show, as the Foster’s attempt to revitalise their kid-centric marriage takes this unassuming and unworldly couple on an outrageous cross-town adventure. 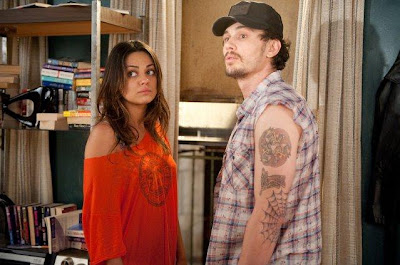 Their eponymous and supposedly romantic evening goes from bad to barmy as they have to avoid gun-totting lackeys (Jimmi Simpson and rapper Common), break into security buildings, drive taxi’s backwards into rivers and pole dance for corrupt and kinky District Attorney’s (William Fichtner) – and all because they took another couple’s dinner reservation at swish Manhattan seafood restaurant “Claw”. Clearly, it 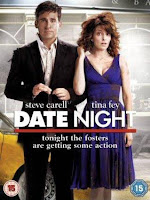 pays to book early. And not pretend to be someone you’re not.

With the purported Mr and Mrs “Tripplehorn” having to retrieve and deliver a stolen flash drive (or “computer sticky thing” as Claire calls it) to mob boss Joe Miletto (stern-faced Ray Liotta), it’s increasingly preposterous – but affable enough – fluff, held together with a sitcom-load of running jokes, call-backs and memorable lines (“For the love of God would you put on a fucking shirt?”).


In a CR@B Shell: Carried by its two leads, Date Night still sparkles with comedic verve even as the plot ties itself in knots. It’s not clever, but it’s never boring, and you won’t have to work too hard to get a chuckle from this zany caper.
aaaaa
Created by ~ CR@B Howard ~ at 12:26