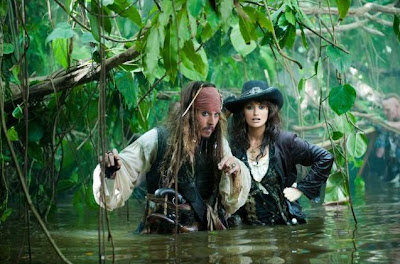 Casting overboard the supposed deadwood of uptight lovies Keira Knightley and Orlando Bloom, and reinvigorated by plot elements inspired by an outside source, hopes were high that the fourth instalment in Disney’s lucrative Pirates of the Caribbean series would be a return to the swashbuckling heights scaled in 2003’s vivacious The Curse of the Black Pearl.

Alas, On Stranger Tides – even with a new director in Rob Chicago Marshall – is simply more of the same overlong, overstretched gubbins which weighed down back-to-back sequels Dead Man’s Chest and At World’s End. Johnny Depp’s perma-drunk capt’n Jack Sparrow has gone from a comedic highlight to a farcical irritation, while Geoffrey Rush’s grisly Barbossa seems to have lost more than his leg betwixt instalments: he isn’t half the mad-eyed delight he used to be. 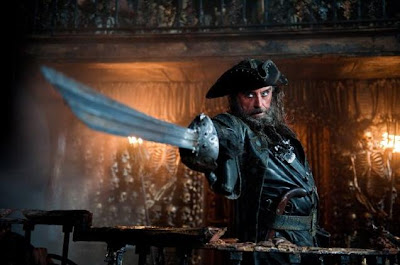 Rescuing his former first mate, Gibbs (McNally), from the noose in the most flamboyantly preposterous fashion, Jack is then charged by King George II (a grotesquely OTT Griffiths) to join forces with the reformed “privateer” Barbossa and locate the fabled Fountain of Youth – but first Jack is determined to upset everyone he comes into contact with by launching a roundabout investigation into the pirate who dares to imitate the illustrious Captain Sparrow.

Surprisingly, it is the bloated film’s first half – retro-fitting a back story which introduces Jack’s former flame Angelica (Cruz) and linking her to the dreaded scourge of the seven seas, Blackbeard (McShane) – which feels like more of a drag than the second, with the plot gaining momentum as the swollen cast are divided three ways in a race to locate the mythical age-defying aqua spring – before the Spanish generals do.

Positive additions to this tired third sequel include the enchanting Mermaids; sultry sirens of the sea who lure sailors with their lullabies only to sprout fangs and attack. It’s a neat ghoulish twist to the usually innocent fish-finned femmes, and Spanish beauty Bergés-Frisbey provides a wonderfully sympathetic portrayal as Syrena, who is captured by the pirates so her tears may be used in the ritual which will bring about the Fountain’s locale. 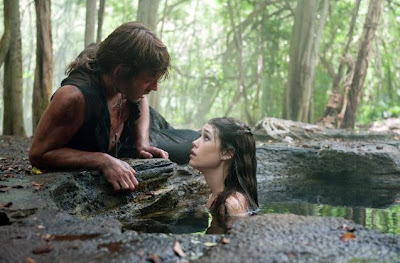 I was also impressed by the mystical gravity-defying effects which herald the locating of the ceiling-forming Fountain, but there is just too much else in On Stranger Tides which disappointed. It’s such a busy film that there’s barely any time for anything to sink in before another swordfight has erupted or Jack is being chased by another band of outraged folks. Indeed, the Spanish faction of immortality seekers are so underused that they’re all but forgotten, while Blackbeard is all the more menacing when he is off screen – McShane’s performance neutered no doubt by the family friendly rating.

Finally, the 3D presentation is a complete waste of time. I think I counted just three instances when something leered towards the screen, and for the other 135 minutes I was hard pressed to even discern there was an added dimension to the buccaneering frivolities. It’s no wonder this technology gets a bad reputation when it’s used as a gimmick on blockbuster films which don’t require it but feel they should simply because it’s available and it sounds good on the advertising – I sincerely hope that isn’t the case for the upcoming Harry Potter finale, but I have my doubts.


In a CR@B Shell: You can definitely have too much of good thing, and I fear four epic high seas adventures is three too many for Depp’s over-exposed cash cow. Of course, riches speak louder than reason, so expect to set sail yet again now that the Black Pearl is out of the bottle. Savvy?
aaaaa
Created by ~ CR@B Howard ~ at 09:45