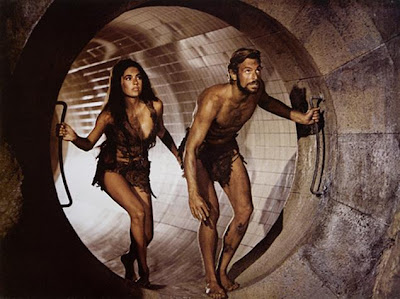 For the opening hour of this first sequel to the iconic Planet of the Apes (reviewed HERE), Beneath... progresses agreeably. Although it could be argued that bringing a second astronaut – in the form of John Brent’s (Franciscus) one-man rescue party – to this upside-down society where apes rule and man is but a primitive plaything was just a retread of Colonel George Taylor’s (Heston) story, there was still much to enjoy.

Simple (and lazy) though it was, I was fond of the way the film opened with a replay of the jaw-dropping events which ended Apes, before interrupting Taylor ’s horseback trot into the sunset with mute Nova (Harrison) with a close encounter with a curious wall of flames and then having him inexplicably vanish in the so-called “Forbidden Zone” beyond the simian society. Brent – who it must be noted does share more than a passing resemblance to a bearded Taylor – herein takes over the role of alpha male, even taking the luscious female companion along with him.

Our return to Ape City is successful in expanding our understanding of this hierarchical simian society, where the gorillas are selected as the soldiers and their leader, General Ursus (Gregory), believes it is high time they march on the Forbidden Zone to mine the vacant land for food. Chimpanzees Cornelius (Watson, stepping in for McDowall for one film only) and Zira (Hunter) are staunchly opposed to the rally – as is secretive orangutan Dr. Zaius (Evans) – but nevertheless the domineering gorillas get their way and the march proceeds.

Hiding from the army, Brent and Nova discover the buried ruins of old New York (our New York ) and their descent through the rubble is wonderfully atmospheric. Despite a budget just half the size of the ‘68 predecessor, the set work looks grand. Alas, it is here where the film goes completely off the rails into “ape shit crazy” territory. Brent and Nova are tortured by a sect of telepathic super humans (yes, you read that correctly) who worship an undetonated nuclear bomb left over from the war which previously destroyed society as we know it.

I can accept the nuclear bomb – that actually fits into the universe that has been established – but to suddenly present a bizarre cult of disturbing mutants who can peel off their skin to reveal a horrible web of veins (I'm still not quite sure why) and have an implausible talent for speechless communication feels horribly disingenuous to what has come before. It’s ludicrous and awkward and feels like a completely different film entirely; as if the apes suddenly don’t matter and we’ve stepped into The Omega Man! My question is this: If humankind has been reduced to primal mutes following the nuclear fallout, how the hell do these skin-peeling freaks fit into the new world order??

As the ape army force themselves back into the picture and break into this subterranean stronghold, a bloody battle wages. I appreciated the increased level of viciousness (this is a ‘15’, the highest rated of the series) and it was a nice touch to bring the AWOL Taylor back for the final fight. Furthermore, the apocalyptic ending was a fantastic – if morbid – knockout blow (which could/should have finished the series), but in spite of all this I still struggle to get beyond that damn telepathic underground cult without screaming WHAT THE FUCK?!! Shame.


In a CR@B Shell: A fine first hour is completely eclipsed by a peculiar, game-changing final third; reducing what I initially thought was a decent sequel into an embarrassing ape-jumping travesty. I appreciate that it doesn’t rest on the original’s laurels, but Dr. Zaius was right – the Forbidden Zone should have been left well alone!
aaaaa