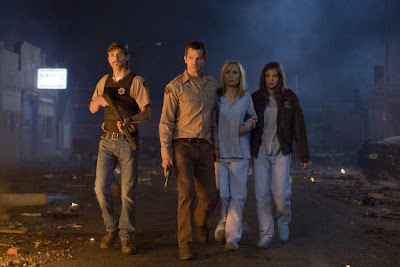 A U.S. community is ravaged by a mysterious disease which turns the affable population into senseless drones with a penchant for horrific, unprovoked attacks, leaving a small band of survivors to battle against the murderous hordes and evade capture by a top secret military force hoping to contain the terror. Hmmmm, sound familiar? Then so should the name George A. Romero, the 'Father of the Living Dead', who didn't stray far from his winning zombie formula when he co-wrote and directed the 1973 B-movie The Crazies. Indeed, he remains close to his creation still, taking on the role of executive producer on this twenty-first century remake.

Ogden Marsh, Iowa is the friendly farming community left in ruins after a plane carrying a biological weapon crash lands in the outlying river, polluting the local water supply one house at a time. Sheriff David Dutton (Timothy Olyphant) is the first to suspect all is not right in his town when cases of irrational behaviour start leaving a body count, and all the phone and internet lines no longer connect them to the rest of the world... When the US military moves in to quarantine the town and contain the artificial virus by any means necessary, David bands together with his practitioner wife (Radha Mitchell), his deputy (Joe Anderson) and his wife’s young surgery assistant (Danielle Panabaker), to evade both sets of enemies and survive the apocalyptic nightmare. 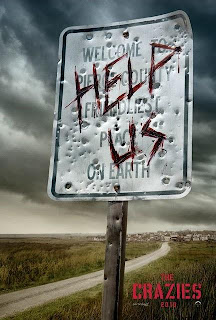 It is hardly an original concept, and yet The Crazies still packs a powerful punch. The infected “crazies” may not want to feast on your intestinal tract like the living dead do, but they retain a deadly precision to their maniacal actions (enough to be able to use a needle and thread) and the capacity for speech and thought, making them a far more terrifying adversary than an animated corpse; they know who they are hurting, yet they still continue. The uncontaminated characters are well-rounded and convincing; gutsy yet sympathetic as they battle against hope to survive a pandemic which has wiped out their town, their friends and their lives, without the actors being such giant superstars that they sway your allegiance.

Furthermore, the writers pack every scene with tension as a multitude of obstacles – and bodies – stack up between the survivors and safety, and the director never shirks away from depicting the most gruesome and appalling brutality – whether the assailant be a glassy-eyed, vein-faced, morally-depraved madman, or a faceless, unremitting military squadron who's dogma is: shoot first, burn 'em second, fuck asking questions (it wouldn’t be a Romero concept without a hint of societal critique). If I have one minor quibble with The Crazies, it's that the plot device of endangered-hero-saved-at-last-second-by-gun-shot-from-off-screen is deployed once too often, but in a film so packed with such a variety of viscerally inventive deaths (Car wash!! Rake!! Coroner’s saw!!), I can hardly grumble.