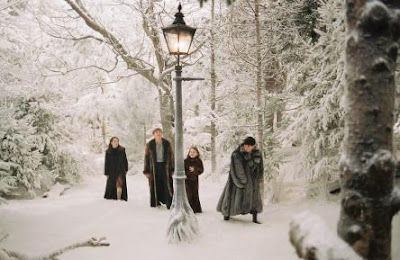 I fear my initial reaction to this epic fantasy adaptation – one I made upon leaving the cinema in December 2005, and stubbornly held until last night – was somewhat harsh. I far too quickly dismissed Andrew Adamson’s The Lion, The Witch and the Wardrobe as nothing more proficient than the late eighties BBC mini-series, albeit with superior CGI. But viewing the first film in the saga for a second time – and in the perspective of the successive entries in the series (reviewed HERE and HERE) – made my appreciation blossom. Either that or I’m getting soft in my old age…

True, the four young actors taking on the Pevensie children – for the first time, it must be noted, they do improve as the films progress – are at times frankly appalling actors (particular the lads Moseley and Keynes whose voices lack any kind of expressive tone or depth), but with so much magic and wonderment flurrying around them any faults are often blanketed over like the snow from Narnia’s eternal winter.

As I revisited Mr Tumnus’s (McAvoy) home for tea, crumpets and sardines, and trekked across frozen lakes with Mr and Mrs Beaver (voiced by Winstone and French respectively) on the way to meeting the mighty Aslan (Neeson) and joining his army to combat the White Witch, Jadis (Swinton), what struck me most about Lewis’s children’s fable is how bleak and frightening it all is: Narnia under the White Witch’s rule is not a pleasant place, with foxes being mauled by wolves, fauns being turned to stone and children being chained up and slapped for asking questions. 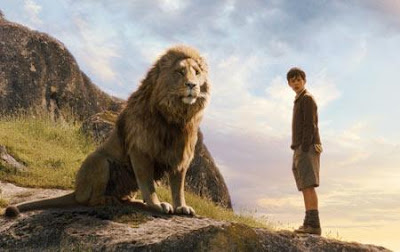 Indeed, even as the snow thaws and the sons of Adam and daughters of Eve (that’s human children, FYI) bring hope back to the whitewashed landscape, Aslan’s blatantly allegorical sacrifice upon the Pagan-esque Stone Table in place of traitorous Edmund (Keynes) is hardly family viewing, with all manner of grotesque demonic creatures (minotaurs, dwarves, giant bats, etcetera) all baying for the lion’s blood under firelight.

Of course it’s hardly much of a spoiler for me to reveal that good eventually conquers evil with Aslan making a magnificent return to defeat Jadis once and for all (though Swinton still manages to wangle appearances in both follow-ups to date), but not before Peter (Moseley) has done his fair share of sword fighting and Edmund has been stabbed. Thank heavens for little Lucy’s (Henley) gift from Father Christmas (Cosmo): a healing potion which makes all battle scars vanish – all except the ones imprinted on the adolescent audience’s brains, that is.

So, allegorical meaning or not, The Chronicles of Narnia: The Lion, The Witch and the Wardrobe doesn’t escape representing some truly adult horrors, even if they do all happen in the back of a magical closet and feature a menagerie of talking critters. This may sound like a negative observation, but trust me it is not: I say bravo to Adamson and his crew for not bowdlerizing some of the more intimidating imagery and granting Narnia a truly visionary scope. I guess we’ve all got to grow up some time; we may as well do it in the comfort of a good film.

In a CR@B Shell: A multifaceted, uncompromising and surprisingly re-watchable treat for the whole family. What better time to indulge upon a second peek inside the wardrobe then at Christmas when we wish we had as much snow as Narnia. Turkish delight, anyone?
aaaaa
Created by ~ CR@B Howard ~ at 05:36