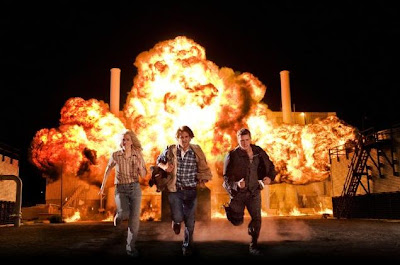 Imagine, if you dare, that Ace Ventura has called a day to his illustrious career as a critter cop and decided to become a mercenary special operative instead. And grow a mullet. Stranger things have happened (like Ace Ventura Jnr. for one… *shudder*). Alllllllllrighty then? Now you’ve got a pretty good idea of what to expect from MacGruber, and it sure ain’t Shakespeare.

Raucous lunacy would be an apposite phrase to use – but in a positive manner. Provided you’re prepared for an 80’s-spoofing action parody then you will have an absolute blast with this wise-cracking loose canon who has a rather distorted opinion of his own awesomeness and a penchant for repeating his favourite quips until they become catchphrases.

The single monikered one-man-army – the brainchild of former Saturday Night Live-er Will Forte, who also embodies the character – is brought out of self-imposed exile (à la When Nature Calls) to stop a dangerous nuclear arms dealer (Val Kilmer) who just so happens to be the same Cunth (yep, that’s really his name: Dieter Von Cunth) who blew up MacGruber’s wife-to-be (Maya Rudolph) on their wedding day. 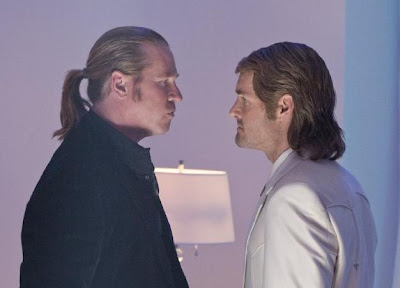 Admittedly, not every gag hits the spot, but there are so many thrown at the screen that some were bound to fly by unnoticed. However, those that do work will seriously have you howling. Personal favourites of this CR@B include: the fate of MacGruber’s self-selected elite team of experts; his insistence on role-reversal dress-up; and his obsessive personally which sees him carry his treasured tape-playing car stereo everywhere and go bat-shit crazy at a motorist who innocently cuts him up.

Basically, MacGruber is one hell of a personality, and the film would have been an absolute disaster if Forte wasn’t so attuned to his unorthodox… baloney. Like Jim Carrey’s iconic pet detective, he’s a law unto himself but he somehow gets results and the girl (Kristen Wiig). His creative use of celery sticks and spur-of-the-moment “plans” (“That isn’t a plan then!” blasts Phillippe’s by-the-book rookie) are either nonsense or utter genius.

My initial apprehension that a more universally familiar actor such as Owen Wilson (admit it, they do look alike) would have helped carry the film more effectively was instantly alleviated. You’ll either hate MacGruber, or you’ll love to hate MacGruber, but rest assured that if the title of this review was enough to raise a puerile grin, then chances are you’ll wolf down this generous serving of Mac and cheese.


In a CR@B Shell: He’s armed and dangerous, but you wouldn’t trust him with a weapon. Luckily, MacGruber is such a tool he’s an American hero, and the same can be said for this hysterical send-up which is so bad it’s bad ass.
aaaaa
Created by ~ CR@B Howard ~ at 12:24