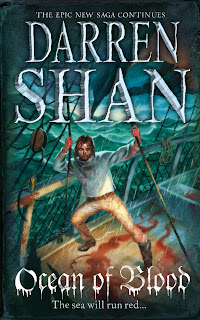 Buoyed by a courteous comment from Darren Shan himself posted beneath my review of the first novel in his latest vampiric series, Birth of a Killer (see HERE – I was well chuffed!), wherein he promised more carnage to come in the saga’s forthcoming instalments, I persisted through a rather weak opening to this recently released second adventure charting the (comparatively) early years in the afterlife of Larten Crepsley before I hit the juicy stuff.

As the orange-haired sunlight-dodger wades half-heartedly through his second “life” like a directionless graduate who isn’t sure what the future holds, drinking himself into oblivion while partying with as many of the opposite sex as he can, I couldn’t help but feel like the opening clutch of chapters in Ocean of Blood were meandering filler; taking a looooong time to say not very much at all. By the sixty-page mark years had passed and I was deep into the hardly mammoth read, yet it felt like the ground covered could have been summed up in a single killer chapter.

That said, it isn’t as if Shan’s nimble prose style is a struggle to read. Granted it isn’t as wickedly poetic as Chris Priestley’s similarly macabre delights (see my reviews HERE, HERE, HERE and HERE and prepare to be hooked), but Shan’s chapters are brisk and punchy and the content easily digestible, so I never considered it a chore to read, just lacking any substantial meat to sink my teeth (or should that be fangs?) into.

For personal reasons, I felt blurring reality and fiction with the inclusion of a cameo from a certain Abraham Stoker, a scribe researching a certain novel on the undead inspired by Vlad the Impaler, was a cheesy misstep. Less cringeworthy than Elvis – sorry, “Bub” – in Charlaine Harris’ Sookie Stackhouse series, but far too reminiscent of The Undead, the dire twenty-first century “official” Dracula sequel penned by Stocker’s descendant Dacre, which also utilizes the iconic author as a character inspired by “real” bloodsuckers.

Returning to the big picture, and mirroring my thoughts on Book 1 (which opened with a horrifyingly brutal punch which would forever shape young Larten’s afterlife), Ocean of Blood – which is rather tame in the horror department for the bulk of its length – accumulated all its firepower for a staggeringly ferocious climatic 30 pages aboard the high seas. 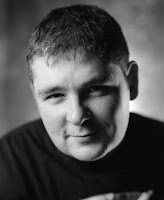 Prior to the finale I was beginning to question what relevance the book’s title had to the land-based narrative, but then Larten and his lovestruck apprentice Malora board the Pearly Tornado bound for Greenland with Larten sick with vampire flu, delirious and desperate for a feed… Much to my morbid delight, the voyage doesn’t end happily for the suspicious passengers or crew, but it certainly convinced me to stick around for book three, Palace of the Damned, set for release in September: There will be blood...


In a CR@B Shell: Still a flitting and narratively insubstantial beast which fails to remedy Birth of a Killer’s flaws, but much like its protagonist, Larten Crepsley’s sophomore adventure is flamboyant and gushing confidence; wearing its scars with pride. Reach the gruesome climax and your jaw will hit the floor; your perseverance justified.
aaaaa
Created by ~ CR@B Howard ~ at 14:30