I had unrealistically high hopes for Universal Studios 21st century update of their classic 1941 creature feature The Wolf Man. I say unrealistic because the film's progress from script to screen was blighted first by the loss of original director Mark Romanek over budgetary squabbles, then by mammoth delays which set it back 3 – yes, THREE – years (it was originally slated for a summer 2007 release). My interest, however, was heightened when I heard Jurassic Park III director Joe Johnston had taken over at the helm, this time swapping scales for hair in resurrecting another blood-thirsty monster for the big screen. Alas, The Wolfman (now all one word, linguists) is more of a dog's dinner than dino-mite.

The plot, which sees estranged nobleman Lawrence Talbot (Benicio Del Toro) lured back to his troubled family estate after his brother goes missing, is unoriginal cliché-ridden nonsense, replete with angry pitchfork-waving mobs, hidden crypts and mysterious gypsy camps. There is nothing new on offer here, and we have seen everything done so many times before that even the supposed twists fail to shock or surprise. The acting is either criminally low-key (a wooden Hugo Weaving as detective Abberline) or hammier than a platter of pigs in blanket (Anthony Hopkins as Talbot Snr., holder of many secrets). And whoever cast Del Toro as an Englishman should be shot with a silver bullet. The Puerto Rican actor visibly tries to hold back his natural accent throughout the 102 minute duration.

Visually, I cannot fault the film. Victorian-era Britain looks suitably glum and washed-out, and the lycanthropic effects – courtesy of SFX supremo Rick Baker – are a delight. The film also doesn't shy away from blood and guts, although it never goes so far as to make the gore unrealistically cheesy. There are a number of nods to other horror genre staples, most notably Universal Studio's other gothic assets Frankenstein and Dracula, which is a nice touch given how deeply ingrained in popular culture such tales of horror have become, however the musical score – from the usually superb Danny Elfman – is so closely reminiscent of Wojciech Kilar's chillingly atmospheric arrangements for 1992's Bram Stoker's Dracula, I was fully prepared to file a plagiarism claim. 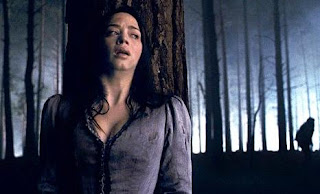 My major issue with The Wolfman, however, is with the editing, especially in the first half of the film, which jumps jarringly from scene-to-scene and can only be described as a hack job. I was left with the opinion that the emphasis was clearly on the action sequences, and plot development was of secondary importance, being sped through with little care for consistency. Whether this is the result of multiple directors leaving their mark or studio interference demanding cuts, I cannot be sure, but it leads to a bumpy ride which never sits comfortably. A moment's pause – or should that be paws? – in the name of exposition would have really benefited the unsympathetic characterisation. It is a shame, as the film really lets rip once the moon is full and the beast is free to roam.