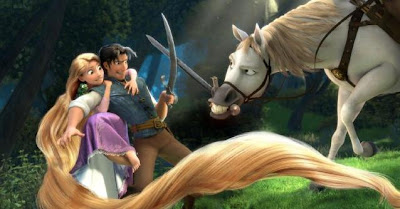 Disney has once again done what Disney does best and weaved its enchanting animated extensions into the roots of an age-old fairytale. In case my hair-related puns weren’t a big enough clue, lengthy-locked Rapunzel becomes the iconic studio’s fiftieth big screen Princess, but the first to be rendered in 3D (unless you count line-drawing-made-flesh Giselle from Enchanted, which I don't).

But adding a dazzling third dimension isn’t the only way director’s Greno and Howard have brought the Brother’s Grimm classic fable into the twenty-first century – this golden girl’s got attitude. Kidnapped at birth by wizened old hag Mother Gothel (Murphy) and locked away in a doorless tower for 18 years, regal Rapunzel (Moore) – with hair magically indebted with the power to defying the aging process – is a surprisingly creative, sassy and independent teen for one so unworldly wise.

Whiling away her youth painting, cleaning and singing to her only friend (a mute but humorously responsive chameleon called Pascal), Rapunzel dreams of her crushingly protective “mother” letting her out to see the glorious gathering of floating lights which each year mark the lost princess’s birthday. She is finally given that opportunity when runaway thief Flynn Rider (Levi) hides in the tower to escape capture and begrudgingly agrees to be the frying pan-wielding gal’s guide in the outside world, in exchange for the stolen crown which Rapunzel has confiscated from the scoundrel. 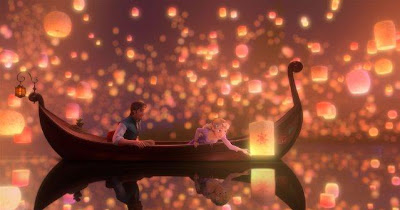 Pursued by an ever-increasing band of adversaries, including the evil Gothel, the kingdom’s guards, Flynn’s doubled-crossed cronies and a stubbornly persistent horse, the dashing rogue opens Rapunzel’s innocent eyes to the beauty of the world outside her stone prison, while the bold blonde beauty predictably opens Flynn’s heart to love – and an honest life. Ahhhh, well it had to end happily ever after, didn’t it?

The considerable changes to the parable (which told of how the witch tricked the Prince into climbing the tower before Rapunzel can escape) open up the story – and the lush, painterly animation – splendidly, granting feisty Rapunzel a freedom like never before, while the decision to make the charming male lead a vagrant adds a mischievous edge t

Mandy Moore as the oblivious Princess particularly impressed me, bringing a sweet yet spunky delivery to Rapunzel’s optimistic dialogue. Bravo to scripter Dan Fogelman for nailing the confident, modern-day teen routine. Ultimately, Tangled does a far better job of juggling the timeless yet contemporary elements than Disney’s last fairytale outing, 2009’s The Princess and the Frog, which just felt far too old fashioned in its attempts to be traditional.


In a CR@B Shell: The Mouse House’s latest beauty and the thief adventure won’t have you pulling your hair out at any embarrassing attempts at fashionable funnies; Tangled is a classic fable which loses none of its magic in staying relevant to its modern audience.
aaaaa
Created by ~ CR@B Howard ~ at 03:29