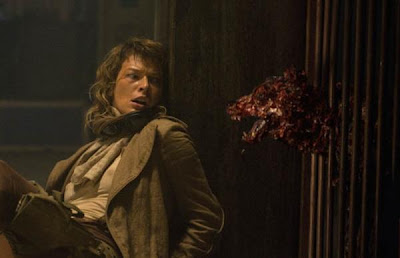 Much like the T-virus infected adversaries who litter the streets of Raccoon City and beyond, the Resident Evil film series will just not die. No matter how many rounds of critical lambasting are directed their way, a couple of years later another one will shuffle and groan its way into the cinemas. It’s not even like the game’s fans think the big screen spin-offs hold a dismembered limb to their cherished console classics – so who is keeping this rotten saga lumbering on??

And breathe... Okay, rant over. After all that seething, it may surprise you to learn that Extinction – the third in the four (to date) part series – is my favourite Resident Evil film to date. Admittedly I have yet to see 2010’s Afterlife, but still “favourite” isn’t saying much: the 2002 original and follow up Apocalypse were dismal. And I’m a huge zombie nut. But then we are dealing with director Paul W. S. Anderson here (Alien vs Predator – need I say more?), who is still scribing this series even if he is no longer behind the lens. 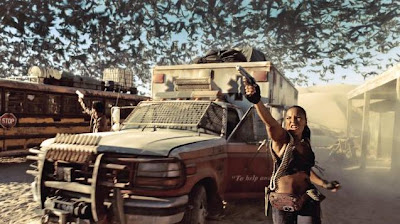 I was impressed by the double bluff opening sequence which slickly introduced us to the mysterious “Project Alice” by cloning the original film’s mansion awakening, but once the real-but-psychically-enhanced Alice (Jovovich) – surviving off the grid for some five years since the devastating outbreak – is back to her usual slogging and slaughtering, the film regresses to a generic safe ground: it’s still watchable enough, it just feels so familiar.

The Umbrella Corporation’s aforementioned project – to find a cure for the rabid infection by extracting a genetic serum from clones of Alice – is shown in its experimental stage to humanize the zombies in scenes straight out of George A. Romero’s landmark Day of the Dead, while the clone breeding ground is discovered by Alice in much the same fashion to how Ripley sees a sea of failed test subjects in Alien Resurrection.

On a positive note, the schematic scene changes are stylishly executed, while the infected raven attack sequence is pretty cool (certainly better than the devil dogs, that’s for sure!), but the bulk of Extinction feels like a long-winded red-herring, with Alice joining Claire Redfield’s (Ali Larter) caravan of survivors on a Mad Max-style romp through the desert – only for Alice to drop out of the convoy as soon as the plan is established to head to the Arctic, leaving her free to face-off alone against a genetically mutated scientist (Iain Glen) in a replica of the “big boss” showdown against Nemesis from the last film


In a CR@B Shell: Anderson’s unintentional ode to genre classics is an adequately entertaining if totally unoriginal popcorn horror. Resident Evil: Extinction was everything I expected it to be – because I’d seen many of its core plotlines before.
aaaaa
Created by ~ CR@B Howard ~ at 13:12