In Sickness and in Health...

… I will endeavour to blog. This poor CR@B has been struck down by a flu-like virus for the past few days (pity me!), so until I’m back to full strength, here is a quick-fire roundup of my latest viewings: 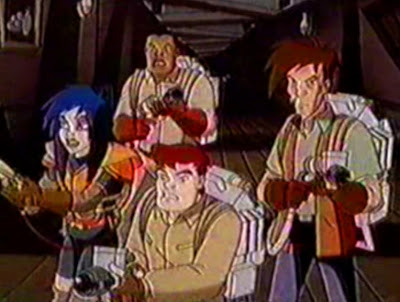 Any ‘Busters lovers fearing a next generation takeover in the eternally-impending second sequel to everyone’s favourite 80’s supernatural comedy should surely be pacified by this animated 1997 dry run, which saw four college students strap on the proton packs and go phantom zapping in lieu of three-quarters of the original gang.

Some may complain that the emphasis on equality in the new members is pandering to contemporary equal opportunities (Kylie is a gothic girl, Garrett wheelchair bound, Eduardo a Latino and Roland African American), but the ch

aracters nonetheless have their own personalities and don’t fall back on lazy clichés (Garrett, for instance, is an extreme sports nut who has a self deprecating attitude towards his disability which borders on annoying).

The series’ greatest strength lies in its dialogue, which zings with banter between the misfit cohorts, who must learn to work together to save Manhattan from supernatural activity. The inundation of cultural references have quickly dated the show, but this is still a fun addition to the franchise which proves you don’t *need* Peter Venkman for ‘Busting to make you feel good. 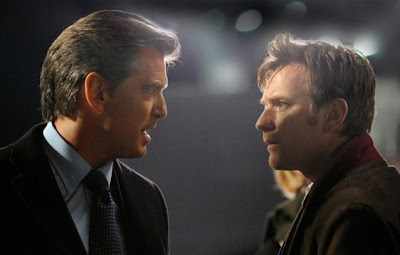 Based on a Robert Harris novel of the same name, and adapted for the screen by the author and director Roman Polanski, The Ghost is a drawn out, slow-burn thriller full of political intrigue. Which isn’t to say I didn’t enjoy it (particularly worthy of praise is the minimalist score by Alexandre Desplat which mimicks the character’s tuneful ringtone to tremendous effect), just that the bloated midsection could have done with a major edit to not make the conclusion feel so rushed.

Ewan McGregor plays a British ghost-writer who is drafted in to complete the memoirs of former Prime Minister Adam Lang (Pierce Brosnan), after his predecessor died in a ferry accident before the project was finished. The top secret assignment is clouded in privacy, and McGregor’s ghost is drawn into a dark secret concerning Lang which coincides with the ex-PM being accused of war crimes by the British foreign minister (Robert Pugh). Does his late predecessor’s error-strewn manuscript hide the clues to this mystery, and is their more to his death then accidental drowning?

The film exudes a composed, almost tranquil, ambience which makes it remarkably effortless viewing, but the mystery plot does drag on somewhat to little revelatory effect. The ending, also, requires a stretch of credibility, coming somewhat out of the blue after two hours of meandering amateur sleuthing. Nonetheless, this is an aptly produced thriller, even if the writer-turned-detective-on-isolated-island concept did strongly remind me of Steig Larsson's superior The Girl with the Dragon Tattoo. 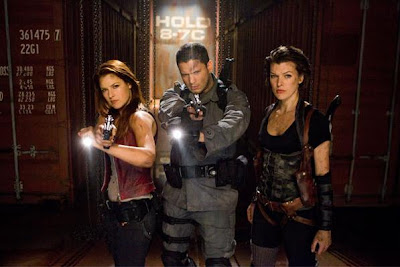 Milla Jovovich returns as superhuman Alice, who takes her newly discovered army of clones to Tokyo to settle the score with Umbrella Corps. Chairman Albert Wesker (Shawn Roberts), before flying to Alaska to rendezvous with Claire Redfield (Ali Larter) and company at the infection-free haven known as “Arcadia”. Typically, nothing quite goes to plan.

Rolling on directly from Extinction’s conclusion, and setting up yet another follow-up with a frustratingly open-ended, ostensibly futile finale [sic] for the hero’s to undoubtedly escape from, what most annoyed me about Afterlife was how spectacularly it fails to stand on its own: this is less a self-contained sequel and more a mid-game level in the shoot ‘em up inspired franchise. Thus: wholly unsatisfying. 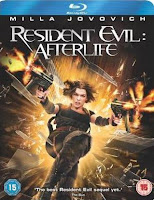 Wentworth Miller channels his Prison Break persona as Claire’s locked up bro Chris, but their relationship stalls from the off due to Claire’s amnesia, leaving him to be no more relevant than any other survivor, while unaccounted mutations nabbed from the fifth videogame mean that every zombie now has tentacles shooting from their face (!), while a hooded, axe-wielding bastard shows up out of nowhere with no explanation whatsoever. It may look pretty, but Afterlife fails on any level deeper than superficial.