ALBUM REVIEW: "An Evening With iMegaphone" 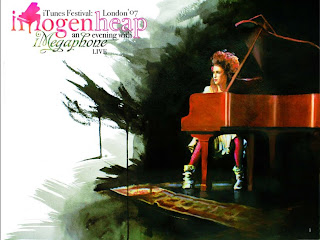 Imogen Heap is the kind of truly original and talented artist who deserves far more credit/popularity/sales in this, her home country. Unfortunately, she is currently the kind of hard-working, independent artist to which people reply “Who are they?!” when I tell them I’m a fan. Remarkably, she has captured the hearts and imagination of the hard-to-crack US market (her latest LP Ellipse debuted at #5 on the Billboard Top 200, as opposed to #39 in the UK Top 40), perhaps due to her truly selfless interaction with fans through blogs, vlogs and twitter (just see how may followers she has - @stephenfry eat your heart out) and some inspired pimping out of her songs for use in hit shows such as The O.C. (RIP), hit films such as The Lion, The Witch & The Wardrobe, and just about everything Zach Braff has ever done.

It is fair to say she is rather hard to classify, mixing electro loops, blips and bleeps with more traditional instruments (her beloved piano), samples of everyday sounds (chatter, cars, a roaring fire, to name but three) and airy vocals. She also isn’t afraid to take risks, such as with her 2005 single "Hide and Seek", which comprises entirely of vocoded vocals and nothing else. It paid off: this is her biggest hit to date. Let’s just classify her as brilliant, yeah?

It came as a pleasant surprise to me last week to learn that her 2007 iTunes Festival concert was finally available for download. This was a piano-only celebration of her 1998 solo debut album iMegaphone (the title of which, fact fans, is an anagram of her name), which saw Immi perform the album in its entirety, alongside a host of B-sides and rarities at the ICA in London .

Exciting. And just look at that stunning artwork from Ryan Obermeyer. 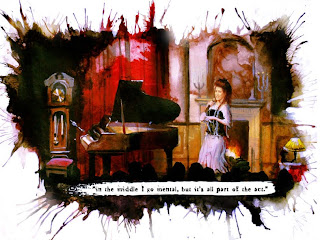 It pains me to say this (especially in a blog so heaped with praise), but I was disappointed. This is strictly for the die-hard fans only. This is the evening raw and unabridged, with crowd interaction, pre- and post-track anecdotes from Immi herself, and every mistake and flaw left in too. True, this adds to the live concert atmosphere, but when it forms part of the track, you’re forced to sit through 6 and a half minutes of what is a 3 minute song, as she laughs off a mistake by enforcing how long it’s been since she last played these songs. Had it been edited so the natter was included but on separate tracks, you could choose to either listen to the marathon session or edit down the musical meat into a CD-length compilation.

Imogen’s undeniable passion and musical talent still shine through with this pet project (again, just look at that artwork – for a digital only release!), it’s just a shame you have to sift through so much filler to get to the good stuff. It makes for a rollercoaster listening experience, most of which only thrills you on your first listen.
Created by ~ CR@B Howard ~ at 05:34