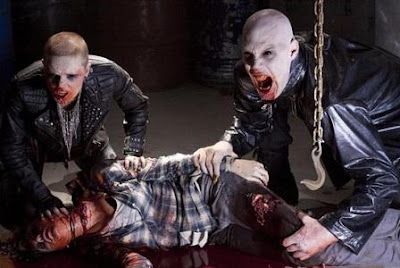 Back in 2007, David Slade’s big screen adaptation of graphic novel sensation 30 Days of Night assured its position as not only my favourite film of that year, but as one of my favourite films of all time. The feral portrayal of the vampire clan descending upon the isolated Alaskan community of Barrow as the sun descended for the eponymous duration left me as chilled as the terrified characters hiding in the snow-steeped settlement.

When a sequel was announced – based upon the franchise’s second comic installment and once again co-written by creator Steve Niles – there was no doubt in my mind that this was a must see follow-up, and my enthusiasm wasn’t even dampened when it became clear that this was to be a direct-to-video offering with the original’s only surviving character – Sherriff’s wife Stella Oleson – being played by a different actress.

I will state right from the off that Dark Days does not reach the same heights as its gloriously unreserved predecessor – perhaps due to a smaller budget and a less original concept – although it does do a sufficient job of expanding the in-story universe and not resting on 30 Days’s laurels, for which it must be commended.

For starters, flashbacks aside, we are no longer in decimated Barrow, but following grieving Stella (Sanchez) as she tours America in a futile attempt to convince the world of the fanged horrors hiding in the shadows. Her only support comes in the form of mysterious tip-offs from a correspondent called Dane (Cotton), that is until she joins forces with three likewise vamp-aggrieved victims and they set out to bring down the bloodsucking network by taking out the big bad vampire queen Lilith (Kirshner). 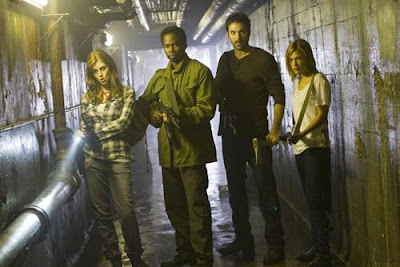 Kiele Lost Sanchez is an adequately tight-lipped replacement for “busy” Melissa George, while Kirshner does what she can with limited characterisation but buckets of style. Unfortunately it diminishes the effect of the animalistic sun-shy hordes when they are merely doing someone else’s bidding, and when Lilith’s attacking skills are eventually put to the test, it is hard to believe that she demanded such respect among her fearsome kind.

I enjoyed the crossovers and call backs to the original film – the vampire hunters board an Arctic-bound ship on course to carry out an analogous attack; Agent Norris (Ruptash) is a “bug eater” desperate to be turned, much like the locked-up lackey in Barrow – while a shocking revelation breathes life into the vampire mythos and leads to a surprising twist in the tale, but in other areas Dark Days falls somewhat short.

The human team of Paul (Coiro), Amber (Baird) and Todd (Perrineau) are one dimensional to the extreme, and for supposedly skilled hunters their “plan” of breaking in to the vampire’s tunnel lair armed with guns – despite admitting bullets only slow the undead down – and a torch (!!) is shoddy to the extreme, while a sex scene seemed totally out of step with Stella’s emotional stance and appeared to only be included to spice up the rating and make Paul more relevant to the story. 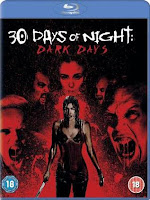 I definitely didn’t detest Dark Days, indeed it seemed quite polished for a non-theatrical release, but my hopes were far too high after the inspired original and no sequel could have lived up to that in my mind. There are flashes of class (look out for the symmetry between two vital scenes) and plenty of brutal violence and excessive gore to keep the sadists happy, but all too often Ben Katai’s sequel is submerged in a cavern of cliché and clambers out looking far too familiar.


In a CR@B Shell: Dark, dank but not dismal, Dark Days is an above average budget-conscious effort, retaining 30 Days of Night’s atmosphere without retelling a replica story. Pity the characterisation wasn’t sharper as your empathy may evaporate to ash.
aaaaa
Created by ~ CR@B Howard ~ at 10:10