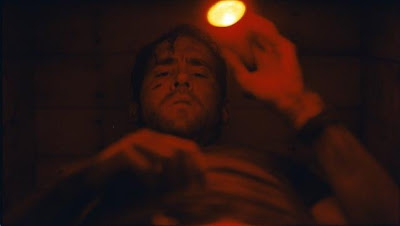 [SPOILERS] After a summer of spectacle stuffed, CGI crammed, bloated blockbusters, what a breath of fresh air this little Spanish/Australian film is: one actor, one minuscule set, one almighty twist, gallons of tension and not a jot of artificial light or computer gimmickry. Maybe it's true what the Oulipian's say: sometimes the best results are bred from the tightest restrictions – and Buried is, quite literally, the epitome of restricted expression.

Ryan Reynolds is utterly superb as American truck driver Paul Conroy, a working class family man whose convoy is attacked while delivering appliances in Iraq. He awakens gagged and bound in the pitch black of a wooden coffin with only a zippo lighter and a mobile phone with intermittent signal. This will be his – and our – prison for the next hour and a half as the camera tracks awkwardly but skillfully around the claustrophobic location. The only contact we have with the outside world are the voices we hear on the other end of Paul's mobile phone.

Cynics may have considered funnyman Reynolds to be something of a risk as the sole actor in a ambitious and dramatic film, the success of which rests solely on his lightweight shoulders. Thankfully he more than delivers a genuine and affecting performance loaded with gravitas as an anxiety-ridden everyman in a nightmarishly terrifying abnormal situation.

Your blood will escalate and your heart will be in your mouth as Paul's desperate dial-outs for help reach many a frustrating dead end: his family's answer machine, an unhelpful 911 operator (Anne Lockhart), inhumane employer Alan Davenport (Stephen Tobolowsky) and protocol-following kidnap specialist Dan Brenner (Robert Paterson – no, not him), all the while receiving chilling phone demands from his terrorist captor (Jose Luis Garcia Perez).

The clock is ticking and the air is running out in this real-time thriller as Paul begs Dan to pay his captor's $1 million ransom demand by 9pm and release him from his underground hell. The darkness is terrifying as time passes with just the sound of Paul's intense breathing as a soundtrack: tension mounts to a heart pounding crescendo as futility sets in and options dwindle.

Writer Chris Sparling and director Rodrigo Cortés's tribute to Hitchcockian concepts is clarified with a familiarly dynamic title sequence, but Buried is an aspiring success in its own right which will stay with you long after the air runs out.


In a CR@B Shell: Sparling, Cortés and Reynolds squeeze the maximum tension from the smallest of set-ups. Buried is a masterclass in suspense which plunges us six feet under for 94 tense, uneasy but powerful minutes.
aaaaa
Created by ~ CR@B Howard ~ at 14:13