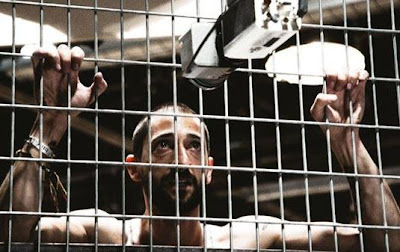 Eight years ago now, whilst I was away studying at university, a housemate of mine introduced me to a German film called Das Experiment (2001). He promised me that I would be utterly engrossed yet equally appalled by the psychological terrorism employed by the characters – a group of strangers being paid to take part in the titular study – and it would really make me question the term “humanity”. He wasn't wrong.

That being said, as the credits rolled on The Experiment, I was just as riled up and exasperated by the narrative as I was in my dorm room back in 2002: this adaptation loses none of its potency in the translation as the designated “guards” – among them mild-mannered Christian mummy's boy Barris (Whitaker) – see the power of authority go straight to their heads as their treatment of the “inmates” – including recently unemployed carer Travis (Brody) – spirals into sadism.

It may seem incredulous that within 48 hours of the proposed 14 day study civility starts to crack as the guards enjoy their temporary authority a little too much, believing they can get away with whatever the hell they like providing the revered red light doesn't turn on and indicate that big brother is unhappy, but The Experiment bares a horrifically close resemblance to the real life 1971 Stanford prison experiment, itself likewise aborted just six days into a two week trial: this shit actually happened, people!

My initial reaction was that it seemed remiss of writer/director Paul Scheuring to not reveal study leader Archaleta's (Stevens) reasons for delaying the cancellation of his controversial research, especially after bullying and cruelty is asserted upon the “prisoners”; but in hindsight 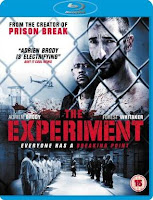 the director made the correct choice, plunging us too into the mock penal environment, forever looking to the red light for guidance.

Whether in German or English, The Experiment is a tortuous and difficult watch, there's no denying that. You'll pick your side and you'll question everything as common decency gets dunked down the toilet and your sense of guilt is shoved into solitary confinement all in the name of a $14,000 paycheck. Is it true what they say: are we all just animals in suits who will turn feral the minute law is placed in our greedy paws?


In a CR@B Shell: As psychotic as it is psychological, The Experiment is a brutally shocking Lord of the Flies for grown-ups. It will enrage and upset your moral code, but you won't be able to look away.
aaaaa
Created by ~ CR@B Howard ~ at 04:03