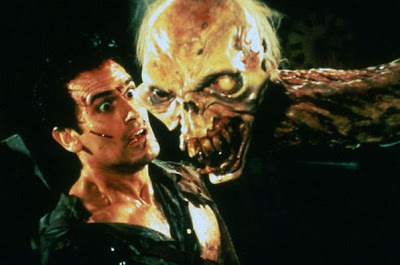 A successful sequel is supposed to take what made the original film so popular and expand upon it to give the audience a fresh-but-familiar story in a universe they adore: bigger, badder and more extreme. By this logic, Sam Raimi's Evil Dead II should be a perfect follow up to his 1981 video nasty (reviewed HERE): bigger budget, badder demons, more extreme loonacy. And yet... *big sigh* I felt like I was watching a more hyperactive retread of The Evil Dead with very little innovation to warrant a return visit to the cabin in the woods.

From the very beginning things didn't sit well with me: the re-shot scenes from survivor Ash's (Bruce Campbell) first night from hell criminally watered down the original story, exorcised two of the main characters, significantly altered plot details and generally had me questioning why it was all necessary (a rights issue with the footage, I have since learnt). Not that it really mattered, however, as I was about to see it all again anyway...

From deadites trapped in the fruit cellar, to reanimated stop-motion corpses, floods of blood, chainsaw mutilations and female-stalking tree vines: everything which made The Evil Dead so horrific, so controversial and so iconic was shamelessly recycled in Part II – but with added lashings of crazy humour!! 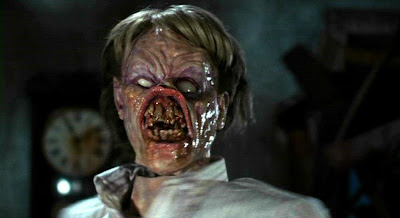 The only time I genuinely raised a smile was at the use of Hemingway's novel A Farewell To Arms to weigh down the bucket which was trapping Ash's now severed five digit limb. At last: an original idea! But even as Ash was joined by Kandarian demon researcher (and daughter to the cabin owner) Annie (Sarah Berry) and three future corpses, Evil Dead II still didn't elaborate effectively. Prime example: Bobbie Joe (Kassie Wesley) is abducted by branches, dragged away to her doom, but even when the team reluctantly go looking for her she doesn't return as a deadite! 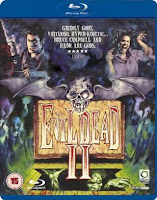 To Raimi and co-writer Scott Spiegel's credit, the finale did diverge from predictability and step things up: the living woodland turns on the cabin as Annie desperately recants a verse from the Book of the Dead which will open a portal to suck the demons into another realm – only for Ash to be pulled through too! But when the highest praise you can level at a film is “it set up a sequel splendidly” then you know you've been let down by everything that came before the epilogue.


In a CR@B Shell: More demonic mad-cappery in the worst possible taste from Raimi's twisted cranium, but I just found everything less fresh and thrilling second time around. At least Army of Darkness looks like a different beast entirely.
aaaaa
Created by ~ CR@B Howard ~ at 16:12