Through a Glass, Darko 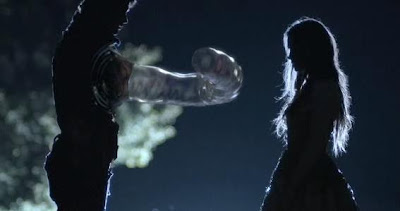 I’ve seen my share of redundant direct-to-DVD sequels over the years, but I think S. Darko truly takes the bunny-shaped biscuit. From phallic-shaped cones of time fluctuation, to nightmarish lagomorphic masks, suspicious house fires and objects falling from the sky – there really is little from Richard Kelly’s head-scratcher of a cerebral mind-fuck that hasn’t been recycled in this belated and lazy cash-in.

It’s 1995 and Daveigh Chase, now all grown up, reprises her role as Donnie’s little sister Samantha (clearly considered too long a word for the abbreviated title…). Leaving behind her family – who have fallen apart following her older brother’s death – Sam Darko and rebellious mate Corey (Step Up 2’s Evigan) are on their way to start a new life in L.A. when their car breaks down and they are forced to take up temporary residence in a backwater town while cool dude Randy (Gossip Girl’s Westwick) fixes their water pump.

A meteorite strikes nearby (evidently the smaller budget couldn’t stretch to a plane engine), a shy nerd (Twilight’s Rathbone) gets a “gnarly” rash and flips out, some Jesus loving adults in positions of authority have questionable opinions about some missing children (sound familiar?) and a shell-shocked war vet (One Tree Hill’s Lafferty) with a recognizable surname is ostracised from the community but haunted by the ghost of the still living Samantha, who tells him the world is going to end (again). 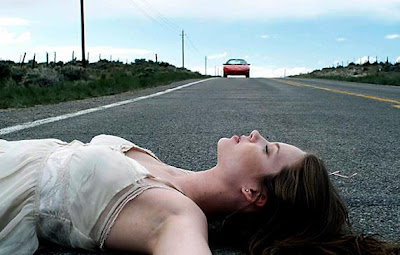 Basically, there is too much going on with too many characters, especially taking into account the fragmented nature of the plot with alternative realities, time travel and dream sequences aplenty. At one point halfway through I was questioning for about 10 minutes whether Samantha was even the main character!! It’s not necessarily confusing (if you’ve seen the 2001 original you can foretell what happens), just unnecessarily busy, with many subplots building up then all but disappearing before they’ve reached a pay-off.

Rathbone’s Jeremy, for instance, becomes infected by the radiation from the meteorite, morphing from a shy and retiring lad into an angry and violent maniac. This could have been a key plot point (even a film of its own), but it comes to nothing, and the truth of his transformation is never revealed – it could be alien possession for all we learn. Ultimately, Jeremy’s only major contribution to the narrative could easily have been offloaded to another character and the dead weight discarded. This is true o

f most of the film’s minor players, too.

Writer Nathan Atkins was clearly trying too hard to stay faithful to Richard Kelly’s iconic vision while simultaneously injecting his script with a myriad of original elements, without compromising, belittling or negatively impacting Donnie’s legacy. I’m afraid to say that this cowardly approach failed, as S. Darko – so packed to the rafters with nods and callbacks as it is – comes across as more of a distorted reimagining than a franchise-sustaining sequel.


In a CR@B Shell: A spinelessly unoriginal mirror image of Richard Kelly’s imaginative stand-alone time travelling conundrum. Pretty enough to look at, but S. Darko is far too reliant upon Donnie to stand on her own two feet.
aaaaa
Created by ~ CR@B Howard ~ at 12:43