WHO? Imogen Heap
WHAT? Ellipse World Tour
WHEN? 12th February, 2010
WHERE? The Junction, Cambridge
WHY? To promote her recent album, Ellipse, and connect with her UK fanbase (Why else do artists tour? D'uh!) 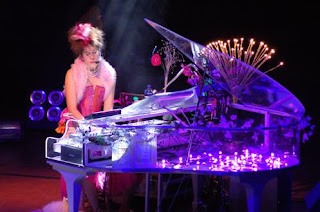 A packed Cambridge Junction were in attendance to watch writer/producer/singer/genius Imogen Heap – fresh from her most recent Grammy glory – play a selection of songs from her ever-amassing back catalogue. The stage was a mystical enchanted woodland, with a giant four-dimensional tree (replete with symbols, triangles and all manner of percussive products hanging from the branches) looming large over Immi's electro-deck and renowned transparent-shelled piano. The projection and light display really complemented the music wonderfully and really transported you away from the cramped, sticky-floored venue.

This was more than simply a 'gig', this was a musical and visual experience, with the audience witnessing first-hand the astonishing production which harmonises all manner of blips, bleeps and tweets (the sound-chip of a toy blue tit) into sweet, audible gold. It was truly an immersive experience, and Immi was as humble, chatty and anecdotal as ever – when she wasn't concentrating on her art.

SET-LIST (and album each song is taken from):

The entire set was an absolute joy, if totally devoid of any songs from Frou Frou's Details and iMegaphone (not that this was a huge problem), but moments of note from the night include:

-- The guitarist from support act Back Ted N Ted donning a large Immi-esque wig for Bad Body Double. I'm assuming Ms. Heap took it as a good-natured homage, rather than an insult to her crazy do.

-- The projection of hundreds of little birds onto the tree centre-piece during... Little Bird.

-- Audience member, guest cellist and VERY brave soul Anna Scott guesting on A-ha! and being persuaded to stay on for another song – which she had only been told to learn mere hours before the doors opened!!

-- Immi adorned some seriously funky shades as she rocked out on a Key-tar during an extended riff on Tidal.

-- There were no electrical looping equipment (“Parrot”) malfunctions this time around, but Cambridge was the city in which Just For Now *nearly* didn't happen in 2007 (I was present then, too!). Ever since then, the vocally multi-layered track has been sung WITHOUT instruments – and a LOT of faith in the audience's ability to sing... in time. It paid off.