WHO? Lady GaGa, with support acts Semi Precious Weapons and Alphabeat
WHAT? The Monster Ball World Tour
WHEN? 27th February 2010
WHERE? The O2 Arena, London
WHY? Because she's an unknown artist who needs the exposure... yeah right!! 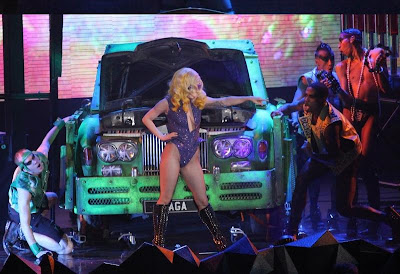 I have been a fan of Lady GaGa's unique brand of colourful disco-funk electro-pop since hearing her debut LP The Fame – and neither that nor her 2009 8-track follow-up The Fame Monster have left my CD player or iPod “Top 25” since (for the record, “I Like It Rough” has been at #1 since last summer). When I heard Stefani Joanne Angelina Germanotta was bringing her Monster Ball World Tour to the UK, I immediately booked tickets, fully anticipating it would sell out sooner rather than later. I was wise to do so.

Seated among a diverse range of 20, 000 fans (including a surprising number of families with young children) in the heavens of Block 414 at the O2 Arena last night, I was fully prepared for a mad but magical night. I was half right. First support act Semi Precious Weapons did their utmost to offend all demographics with their brash, unnecessarily explicit pop-punk act, which involved an expletive every second word and an on-stage costume change for the stiletto-wearing front man during a hideous 20-minute set. Having toured with Lady GaGa since 2006, it's not hard to see why she is now a worldwide megastar, while SPW remain unknown. Let's just say “fruitcake” was the most polite reaction from the crowd seated in our vicinity.

Alphabeat were far more suitably mild-mannered – not to mention entertaining – playing through all five of their singles (to date) and finishing with their fun, pop-tastic debut “Fascination”, without a single swear word or allusion to oral sex. See, SPW, it can be done. As we waited, waited and waited for Ms. GaGa to take to the stage, we were treated to almost all of Michael Jackson's back catalogue (okay, I exaggerate... slightly), which was great fun for me, but by the time we got to “Thriller”, the audience was clearly restless. To collective delight, the track faded halfway through and the arena lights went down...

Intro:
1. DANCE IN THE DARK (The Fame Monster)

Following a countdown video introduction set to a remix, “Dance in the Dark” was a fittingly punchy opening number, and all the more effective for not being an obvious choice. It was a stylish entrance, with half of the track being sung in silhouette behind a fabric curtain, backlit in pink lights. As the curtain lifted, the stunning and elaborate “Street” set was revealed, kick-starting a conceptualised storyline which ran throughout the concert.

The concept went that on their way to the Monster Ball (funny, I thought we were already there?!), a group of friends – the shows' backing dancers – have the misfortune of their car breaking down. But fear not, for Lady GaGa will guide them to the Ball, over the course of the night and through a myriad of imaginative acts and glamorous set-pieces. The night's opening dance numbers, debut #1 single “Just Dance” and a funky combo of “Beautiful, Dirty, Rich” and “The Fame”, were sandwiched between two unreleased tracks – a brave choice, in my opinion – before Ms. GaGa popped the malfunctioning car's hood to reveal a piano underneath (see main photo, above). That'll be the problem then, guys; no engine. What a brilliantly quirky innovation, I thought, assuming this colourful prop would play a large part throughout the evening, only for act one to draw to a close soon after and the car/street set never to be seen again.

Following another lengthy video interlude, a second impressive set was revealed, including a subway car from which the performers made their (second) entrance. A trilogy of fun, uptempo dance numbers were followed by a pair of heartrenching ballads, as GaGa took to the piano and showed that underneath her flamboyant ways and outrageous costumes, there is great talent. I was quietly disappointed that during these quieter and more reflective numbers, the sound engineers still felt there was a need for bassy beats and overproduced backing. I believe a piano solo would have made a more simple and subtle point. But subtle wasn't an option at this gig. 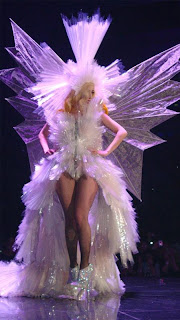 As GaGa and her friends – including an angel with a black harp, not quite sure where they picked her up? – made their way down the Yellow Brick Roa- sorry, Glitter Way, a circular light rig descended around the journeying posse for long enough for yet another costume change. As the so-called twister lifts, Lady GaGa is standing reborn in the popular “living dress” (see photo, right), a remarkably elaborate fairytale costume replete with moving parts, which is paraded to all of the arena as GaGa is lifted high above the crowd during the ethereal “So Happy I Could Die”.

Unsurprisingly, the trio of songs which comprised the core of the third act – set in a dark and dangerous “Park” shadowed by angled branches and pointed vines – were all taken from the more gothic and mature The Fame Monster. The lampshade-esque dress worn for “Monster” was perhaps the most ridiculous of the night, but it was taken off within minutes. In an unusual divergence from the disjointed storyline, GaGa stumbles upon the eternal fountain of youth and drinks deeply of the blood that flows in it. Family friendly entertainment here, then.

Following another video interlude, we were treated to a real crowd pleaser, as the curtain came down and the opening vocal murmurs flashed across the fabric in red disco lights. Obviously GaGa couldn't NOT perform “Poker Face”, but it felt somewhat wedged into the overall concept, underlining the case that her music is bold enough to stand on its own, without the need for all of these costly and distracting excesses. 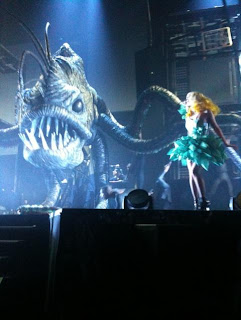 We were still in “The Park” for the penultimate number, only now a giant multi-tentacled monster was lurking in the shadows at the back of the stage. Not quite sure why, but it was a truly wonderful prop; creepy, hideous and disconcertingly realistic – pity it 'died' within 4 minutes and wasn't given more time to shine. For an artist who throughout the night continuously remarked about how much she hates money, it would be interesting to know how much this overblown concept cost to realise?!

Act 4 – “The Monster Ball”:
16. BAD ROMANCE (The Fame Monster)
Now inside her gyroscopic spinning ball – which she stepped out of within half a minute!! – and wearing a glaringly shiny outfit, the confusingly complex concert concept came to a head-scratching but high-spirited close; the Monster Ball ended just as Lady GaGa and her friends “arrived”. “Bad Romance” was a wonderful choice of closing song, as the crowd took to their feet and collectively sung “Ga-ga oh-la-la”, but like all the preceeding acts, it was all over and the arena lights were back on before you had really had a chance to appreciate what you were seeing and hearing.


CR@B Verdict: The music was immense, but the over-stylised concept was distractingly busy and overwhelming. Yes, I realise it is all about freedom of expression, but c'mon... I really don't know what parents who had taken their children thought, but I do know the family to my left didn't stay beyond the halfway point.
***.5
All photographs from gagadaily.com. All credit where due :)
Created by ~ CR@B Howard ~ at 10:40