A (Police) Force To Be Reckoned With? 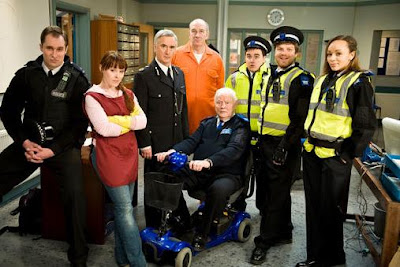 The characters are loud, uncouth, hyperbolic stereotypes, the plot requires an acceptance of the absurd and the humour is zany, bordering on brash. Like the abysmal The Persuasionists, this pilot to a potential new BBC Three studio sitcom about the struggles facing Police Community Support Officers, really shouldn't work. And yet, unlike The Persuasionists, somehow it does, bringing to mind the over-the-top, surrealist edge of The IT Crowd, without feeling like a futile retread of that other police-centred sitcom, The Thin Blue Line.

Being imprisoned for swan murder, framing the Ukrainian cleaner (Ruth Connell) of theft and playing a potentially criminal, definitely loony medical doctor (a fabulous turn by Simon Day) at scrabble are all in a day's work for disrespected Essex PCSOs Perry Benson (Rhys Thomas), Len Orbison (Luke Gell) and Kelly Eve (Ashley Madekwe). That is, when they aren't being dangled over a bridge by the local youths, suspended from the ceiling in their underwear by 'propper copper' PC Preston (Andrew Brooke), or fishing colostomy bags out of the staffroom fridge.

Yes, you read that correctly. As I stated previously, Above Their Station requires that you step out of reality and into this scantly distorted hyper-reality. I'm not talking Mighty Boosh levels of surrealism here, but if you cannot accept that a 'mad' scientist works beneath the police station, developing state-of-the-art laser guns and picking the juicy bits out of Tropicana, then this is not a sitcom for you. Personally, I had a blast, once I had adjusted to the logic of this off-kilter world.
The only criticism I would have is that lead character Perry had little impact upon either of the two plotlines running through the episode, spending most of his time following after unworldly Len or fawning over ballsy Kelly, who barely registers his advances. Seems I wasn't the only one. But this is only episode one, and if a series is commissioned, I am sure we will get more of a feel for what his character is about as he is given time to shine. After all, his alter-ego is writing it.

CR@B Verdict: While it isn't the most uniform of concepts, I hope a regular series beckons and gives us a chance to walk to the beat of these beleaguered PSCOs.
***
Created by ~ CR@B Howard ~ at 15:06

Email ThisBlogThis!Share to TwitterShare to FacebookShare to Pinterest
Labels: Above Their Station, BBC, pilot, review, Rhys Thomas, The IT Crowd, The Mighty Boosh, the persuasionists, The Thin Blue Line, tv