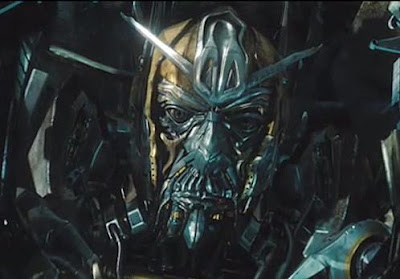 There’s no getting around it: I watch a lot of films. Too many, probably. For this reason there’s no avoiding the occasional turkey; it’s inevitable. But even so it feels like a bloody long time since I last saw a film which blew me away. Take a look back at my last ten reviews: you’ll see a host of two and three star verdicts; average fluff which failed to live up to expectations. When will this slump end? When will I once more leave a cinema or eject a disc and barely be able to contain my glee at the wonder which has just enthralled and enchanted me? Certainly not with Transformers: Dark of the Moon – quite the opposite, in fact…

“You lied to us!” rages a truly pissed off Optimus Prime (Cullen), megalithic leader of the Autobots (they’re the good guys) and part time truck cab. He may be venting at government agent Charlotte Mearing (McDormand), but he nevertheless pretty much sums up my reaction to this chaotic and overblown turd of a second sequel to Michael Bay ’s action figure-based blockbuster. If you think I’m being harsh and unreasonable already, then brace yourself.

2007’s Transformers was a genuinely enjoyable larger-than-life sci-fi action adventure, with the robots in disguise fleeing their crumbling planet of Cybertron and bringing their civil war to Earth. Follow up Revenge of the Fallen (2009) was an awkward beast; as much as I was entertained by the ramped-up humour in this depiction of the reawakening of the eeeevil Decepticon’s leader The Fallen while I was watching it, hindsight did it no favours and relegated my enjoyment to mortification. 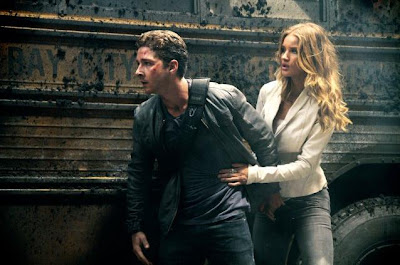 Following a ridonkulously ma-hoosive box office take which guaranteed no magnitude of critical dissatisfaction would prevent a third instalment, Bay – after initially citing “my brain needs a break from fighting robots”– quickly changed his tune and set to work, promising any naysayers that the stoopid tomfoolery and dumb-ass robo-characters which disgraced RotF would be dialled down in favour of a return to the successful balance of fun and fighting achieved in the original.

For all its portence at an elevated maturity with an impressively grand opening sequence which shows the *ahem* “true” but oh-so-top-secret reason for man’s race to the moon in 1969 (to investigate the crash site of an Autobot ship called The Ark, purportedly), Dark of the Moon all too quickly falls back into cringeworthy slapstick – and stays in that uncouth yobbish mode where “dickhead” “kick ass” and “shit” are dialogue standards for the following two and a half freakin’ hours of deplorably trite – yet ostensibly family friendly – farce.

Fresh out of college, everyman hero Sam Witwicky – now with new girlfriend Carly (Huntington-Whiteley) after Megan Fox was dropped for Bay-bashing – is harbouring two gobby miniature Autobot refugees (who are most irked at being treated like pets) in his pad while he desperately tries to find a job which gives him the same feeling of responsibility a man who has twice before saved mankind is accustomed.

Meanwhile, on a military-aiding mission to Chernobyl, Optimus and the Autobots discover a Decepticon-possessed fuel cell from the presumed destroyed Ark which leads them to the crash sight on the moon and the uncovering of an “off-line” Sentinel Prime (Nimoy) – the robot who Prime took over from as leader – and his creation, the Pillars, which, when used in unison, can open up a Space Bridge between two points in space. You with me so far?

It transpires that the revival of Sentinel and recovery of the Pillars was a Decepticon ploy (they’re certainly living up to their name, the blighters) as Optimus – holder of the All-Spark (the catalytic McGuffin from the first film) – is the only machine with the ability to kick-start his former chief and thus allow the Pillars to be used to transport Cybertron (a planet, don’t forget – this jargon is a joke) to Earth – thus wiping out humankind and rebuilding the mechanoid’s homeworld. Nothing’s ever small with Michael Bay, is it?!

As if all of this robo-action wasn’t enough, pretty much every human actor from the previous two films shows up as well, even when surplus to requirements (Dunn and White as the Witwicky’s are the biggest culprits), while the gargantuan cast is even further bloated by well known faces (Malkovich, Dempsey, The Hangover’s Jeong) hamming it up like hyperactive fools. It’s a disorderly nightmare of a mess to be honest: chaos reigns with too much happening all the time, both plot-wise and aesthetically. 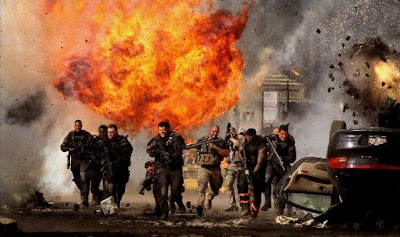 When the camera remains stationary for long enough for you to immerse yourself in the diegesis, the 3D upgrade actually does impress – it’s just exceedingly rare that all hell isn’t breaking lose on screen leaving you lost for a single focal point. Our poor planet doesn’t exactly come out of Dark of the Moon all too well, with the plot all too frequently descending into a frenetic excuse for a fight with giant toys pummelling the scrap out of one enough and taking not just entire buildings but streets and pockets of petrified people with them too.

Rom-com regular Dempsey does pretty well outside his comfort zone as a traitorous Decepticon spy, even if it is hard to stand out against the bedlam, while Huntington-Whiteley is little more than eye candy for the men (at one point Dempsey compares her to the curves on a classic car while the camera lingers perversely on her stunning bod), standing around pouting excessively and looking vacuous as the world crumbles around her.

Well, almost. As CGI carnage dominates in the overblown war zone climax, Carly is making her way to safety when she happens upon wounded head Decepticon Megatron (Weaving) – a demented and villainous giant robot, lest we forget, who orchestrated the very battle which has decimated the city and killed hundreds. So what does this insignificant and unarmed girl do? Why she walks right up to him and verbally abuses him, labelling him “Sentinel’s bitch”, of course!! WTF?! It’s just one of a myriad of implausible but allegedly “awesome” moments which irreparably damage this once thrilling franchise. Please, Michael Bay , no more lies; no more of this shit!


In a CR@B Shell: A “prime” example of a bull-headed director thinking he knows best and totally dropping the ball: completely ignoring Revenge of the Fallen’s copious critics and deceiving fans into expecting a superior and less juvenile cluster fuck, Transformers: Dark of the Moon instead exemplifies the first sequel’s faults to an embarrassing and headache-inducing franchise nadir.
aaaaa
Created by ~ CR@B Howard ~ at 12:29