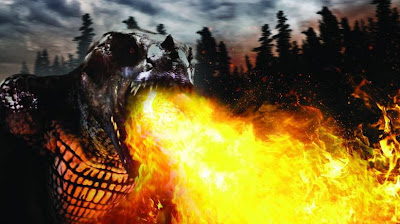 Taking the skeletal essence of Moby Dick and burying it in an archaic fantasy land where dragons, not whales, are the burdensome beasts hunted and harpooned for their highly sought-after natural resource (the fiery neon catalyst vitriol, in this case, rather than blubber), Ryan Little’s low budget genre piece tells the story of Captain Ahab’s (Glover) vengeance-motivated lifelong hunt for the great white dragon which killed his sister and left him a mentally and physically scarred husk of man.

Told, like the novel, from the perspective of dashing-but-wholly-uninteresting wanderer Ishmael (Sevier), Age of the Dragons fails to make the most of its mystical snow-steeped vistas and limitless fantasy palette, delivering a flat, grey and emotionless story which lacks vigour and imagination. Despite a limited budget, the CGI – when employed – is passable if economical at rendering the winged prey, but it is the humans which let this direct-to-video release down. 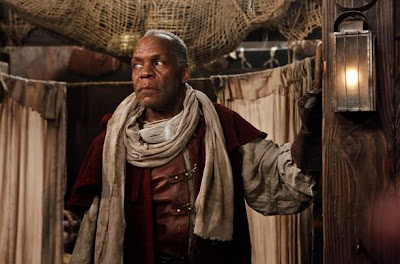 The acting fluctuates from corny over enthusiasm (Glover's garishly unstable cap'n; a bubbly but criminally underused Jones) to monotone amateur disinterest (pretty much everyone else). It's a shame the film's tone sticks much closer to the latter than the former, feeling almost completely soulless and lacking any humour to complement its fantastical frivolity. For anyone who thought Season of the Witch was bad (which I didn't – see my review HERE); that looks like an Oscar winning masterpiece next to this second rate tosh.

If Ishmael's insipid flirtation with Ahab's adopted daughter, Rachel (Pernas), wasn't bland enough, his enigmatic right-hand man, Queequay (Kruse), is a constant impenetrable aggravation, too. Clearly superfluous to this cut-price adap, he morphs from being a mute mystery in the first half to a mystical guru who won't shut up with his vapid stoner “logic” in the second. Furthermore, his reasons for steering clear of the grand cavern showdown are weak to the point of contrivance and the film would have benefited greatly from having Vinnie Jones' banterful Stubb's hang around to the end in place of this soporific bore.

But most irksome of all is story drafter's Aglaure and Black's uninspired translation of Ahab’s whaleship, the Pequod, which here becomes a cumbersome earth-bound craft comparable to a primitive Dead Reckoning in Land of the Dead, rolling through the tundra protected (scarcely) by a row of decorative shields nailed to its rickety wooden exterior. Quite how it was powered in an pre-technological society, though, I'm thoroughly stumped. It feels like a lazy fix (indeed one of many in the film) to allow this dragon hunting caravan of landlubbers to travel together yet still use shipping terminology such as “deck” and “vessel”.


In a CR@B Shell: Anything but a whale of a time, Age of the Dragons is a disengaging and hollow experience despite its treasured source and vivid landscape. A lazy, tedious and clichéd beast, the film is as awkward and clunky as its title (surely “The Age of Dragons” or simply “Age of Dragons” would have been more pithy?), and it can't even blame its low budget on its multitude of flaws.
aaaaa
Created by ~ CR@B Howard ~ at 10:40