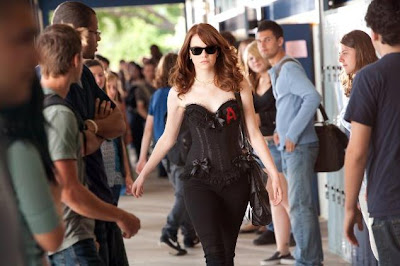 The old school alumni chillax in the courtyard with the new school freshers and the pair have a blast in this refreshingly self-aware teen comedy which openly pays homage to the classic John Hughes comedies of the 1980s (The Breakfast Club, Pretty In Pink, Ferris Bueller’s Day Off), infusing the retro references with the smart-mouthed indie cool of more contemporary gems such as Clueless and Juno.

Inspired by the 1850 novel The Scarlet Letter, Will Gluck's Easy A sees respectable-but-invisible high schooler Olive Penderghast (Stone) become the talk of the campus as a little white lie about losing her virginity spirals into a bogus reputation as a “dirty skank” – a reputation which Olive chooses to shamelessly embrace by stitching cloth “A”s onto all her clothes (akin to the acknowledgment of adultery in Nathaniel Hawthorne’s opus). 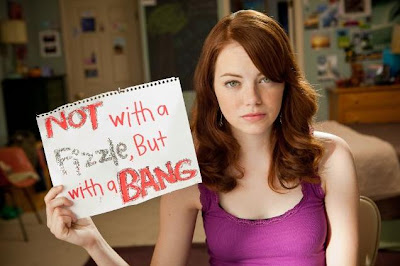 As her best friend (Alyson Michalka), fanatical chastity groups and teachers turn against her, Olive soon realises that her social experiment of not having sex but saying you are has its drawbacks – namely, she’s not actually getting any sex! And so Olive takes to her web cam (how very twenty first century!) to confess her sins and win back the respect she has spurned, and the affection of the one guy she really does want to wear an “A” for, Todd (Penn Badgley).

Undeniably it is the fabulous characters who make what could have been a crude, offensive film into a pocketful of sunshine. Superbad and The House Bunny’s red head Emma Stone is a fiery revelation of hip confidence in her first lead role as the candidly intellectual Olive; she’s peppy, witty and banters hilariously with her “clued in” parents – Patricia Clarkson

Praise must be paid to writer Burt V. Royal for the zippy dialogue and abundance of cliché-averting winks and nods, making what could have been a lazy, piggybacking succession of riffs into a smart and original gem. Even a climatic pep rally musical number doesn’t feel gauche in the candidly inspired and unreservedly modern context; after all, what would Ferris do?


In a CR@B Shell: Stone shines in this admirably sharp addition to the teen comedy genre. Easy A knows what it is and thrives amongst its classmates, working hard to garner an honourable rep standing atop its peer’s lofty shoulders (boombox aloft, natch) without sulking in the shadow of their acclaim.
aaaaa
Created by ~ CR@B Howard ~ at 02:27