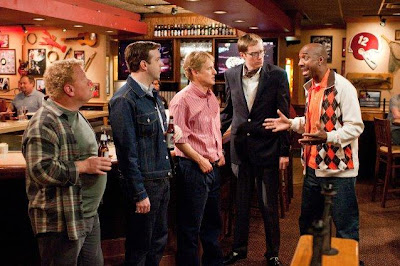 [SPOILERS] Hall Pass is exactly what we have come to expect from Bobby and Peter Farrelly, the sibling duo that brought us There’s Something About Mary, Me, Myself & Irene and Shallow Hal: it’s a teenager’s idea of what is “hot”, “cool” and “hilarious” acted out by characters who should know better, and by the time of the end credits do know better. It’s the filmic equivalent of a mid-life crisis: American Pie for those whose crust has gone stale and filling decidedly mouldy.

Despite being happily married to two gorgeous women, best mates Rick (Wilson) and Fred (Sudeikis) are still obsessed with the independent living they enjoyed back in college: checking out every woman they walk pass, comparing real with fake boobs and debating over puerile fantasies during card games with the guys. But when their exasperated wives (Fischer and Applegate) decide the best thing for their marriages is for their men to have a taste of the freedom they so crave (the eponymous Hall Pass, as the gesture is known), Rick and Fred discover that they aren’t the young studs they once were, and their lives have actually changed for the better.
- 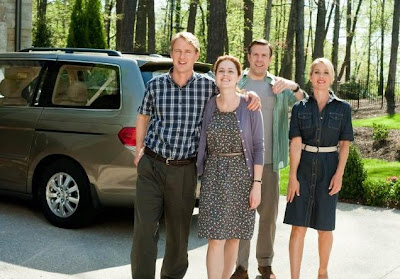 So the moral at the end of the exercise is admirable enough, if as obvious as Jack Black discovering beauty isn’t only skin deep, but Hall Pass’s honour is muddied by the wives actively enjoying the freedom their relaxed vows offers them as they party with Fischer’s dad’s baseball team. In fact, Applegate’s Grace comes out of the experience by far the least favourably. I must be a traditionalist to feel decidely uneasy about the “free love” subject matter, but it does come across as somewhat desperate and indecent, especially considering Rick has two young children!

Add a smattering of the Farrelly’s trademark shock humour into the mix and Hall Pass begins to look like a decidedly awkward affair. I’m not so uptight that I don’t find embarrassing bodily functions funny – I was laughing along with the rest of the cinema – but when the characters are pushing 40 it loses its charm. I’m not suggesting that adults are not allowed to have fun, but watching an OAP (Jenkins) parade around like a horny fresher, caked in fake tan and bling and chasing anything that moves is simply revolting – you just want to sake some real-world sense into the man who obviously has never found love or been truly happy.

Miles superior to Adam Sandler’s similarly themed groan-fest Grown Ups; the laughs in Hall Pass are heartier and more frequent, thanks chiefly to Stephen Merchant and Larry Joe Campbell, who bring their oddball personalities to the table as part of Rick and Fred’s gang. But when they suspect that their mates are all talk and no action, they all too quickly drop out of the antics, leaving the film feeling rather front-heavy, vanishing completely until a skit mid-way through the end credits. Older men just don't have the stamina!


In a CR@B Shell: Predictably juvenile fare from the Farrelly’s, with a moral bow tying up the close; Hall Pass delivers on the giggles but can’t completely shake the awkwardness of having middle-aged men acting like kids half their age.
aaaaa
Created by ~ CR@B Howard ~ at 02:05