A Fate Worse Than Destiny 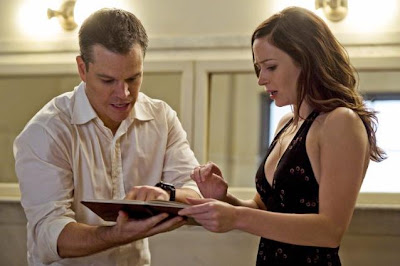 This is exactly the type of film I usually adore, but even the trailer didn’t grab me as anything special. My primary issue was that I found the central premise of “being on the run from your own destiny” to be incredibly cheesy, and yet I went to see it regardless. You see, when you’ve got a Cineworld Unlimited card and you don’t hand over nearly £10 per visit, you’re less fussy about what you watch on the big screen. And taking a risk can sometimes change your life. Which in a roundabout way is what The Adjustment Bureau is all about…

For the majority of this loose George Nolfi adaptation of a Philip K. Dick short story I was adequately content, even though the science fiction element plays second fiddle to the love story between “people’s politician” David Norris (Damon) and playful ballerina Elise Selles (Blunt). The lead actors spark fantastically and their banter feels authentic; it’s love at first sight. However, fate has another agenda and portal-hopping, hat-wearing members of the eponymous team set about “correcting” destiny so the pair never sees each other again. 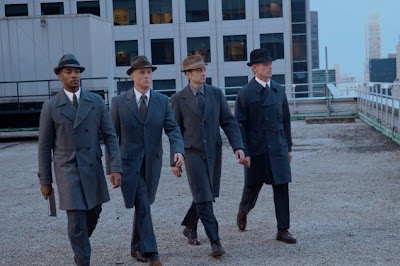 Why? Because everything happens for a reason in the grand scheme of things, provided the omnipotent “Chairman” (an unseen, God-like master) wants it to. Otherwise his bureaucratic “angels” are dispatched to make subtle but influential changes which will affect your life for the good of the scheme without you ever knowing. The predicament is, after not missing his bus and turning up to work ten minutes earlier than he should have – catching the bureaucrats in action – David now knows, and he’s a determined individual who won’t give up on the love of his life without a chase.

The problem with these mind-bending, intellectual thrillers (Inception likewise springs to mind) is that their fantastical, futuristic premises are so mired in their own rules, that they can all-too easily fall apart if you think about them too logically. The agents of fate are so unattached to humanity that they repeatedly send millions of people to their death – so why do they risk their entire covert operation by revealing themselves to David, instead of erasing his mind instantly? Other than the film ending after five minutes, it seems like an almighty risk for the sake of one life, regardless of his political potential.

Furthermore, agent Richardson (Slattery) warns David that if he ever utters a word of their existence to anyone, his mind will instantly be wiped. Yet even when David does eventually disclose all to Elise, all he has to do is knock one of them out, pop on a piece of portal-jumping headgear and go on the run. From an omnipotent power?! Hmmm… The team seem far too incompetent to wield such power, with a rogue agent (Mackie) even actively going against his orders and assisting David just because he feels bad for him!! And our lives are in his over-sentimental hands? Chairman help us…


In a CR@B Shell: The romantic aspect and “fate versus free will” debate sizzling under the thrilling surface are entertaining enough, but when the plot hinges on such loose reasoning, it’s hard to suspend disbelief and take the jump into The Adjustment Bureau.
aaaaa
Created by ~ CR@B Howard ~ at 03:44