Mash of the Titans 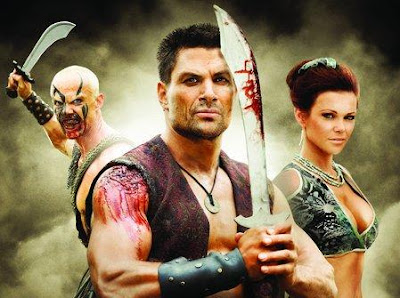 Swordfights, sorcerers, sacred scrolls, sea voyages and sexy seductresses – Sinbad and the Minotaur is a feature length episode of Hercules and Xena in all but name. Ironically, given its excruciatingly pitiful budget, it also looks like it was made in the mid-90s, too. Not that this stops the Australian production from attempting an array of Clash of the Titans-esque fantastical and mythological concepts – demons, beasts, invisible cloaks – even if the results are often amateurish, if commendable for their ambition.

This cod-reimagining of Greek/Arabic myths is being released for one reason and one reason only: to cash in on the success of Starz series Spartacus: Blood and Sand, which features “Sinbad” himself, Manu Bennett. I can only assume he made this before he got his big break? His dashing rogue protagonist is on a mission to find the fabled golden head of the Colossus of Rhodes, which he and his hearty (but ultimately disposable) crew have tracked down to a mysterious island. But the treasure isn't that easy to acquire when he is pursued by a pissed off sorcerer (Grives) and a heavily-guarded labyrinth stands in his way...

A community of shapeshifting demi-god descendants and a vampiric blood-draining half-demon henchman (Robinson) stand out as admirably successful twists to the matinee romp routine, while the director's willingness to splash the claret is clearly an attempt to further appeal to Spartacus fans. Scripter Jim Noble's cocksure attempts at humour occasionally succeed (“Details!”), but ultimately this “fantastic voyage” is let down by shoddy production values, cheesy editing (watch out for the overused shaky-cam) and the overriding feeling that the whole thing has been overacted and overdubbed .


In a CR@B Shell: Not a colossus waste of time, but too corny to be taken seriously; Sinbad and the Minotaur has aspirations to be in the same league as The Scorpion King, but budgetary restraints mean that this is one treasure the legendary hero won't procure.
aaaaa
Created by ~ CR@B Howard ~ at 15:34