The Sky's the Limit... For Now 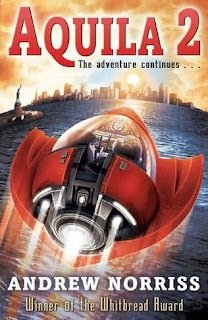 Be they in book or on film, it is common practise for successive instalments in ongoing children’s series’ to mature parallel to their readers, so as to not divest the interest of their ever-growing fanbase. Hence you constantly hear how the Harry Potter and Twilight sagas are getting progressively darker in tone as their (non-vampire) protagonists creep towards adulthood.

Andrew Norriss, however, has decided to buck this trend with his high-flying follow-up Aquila 2, delivering a story with congruous tone and writing style to his popular 1997 fantasy (review HERE). But then, after 13 years, it is fair to assume that he is no longer writing for the same audience, as anyone (excluding yours truly, obviously) who was interested in the sci-fi flavoured adventures of best mates Tom and Geoff upon first release has long since moved on to adult fiction.

13 years to us, perhaps, but in the in-prose universe it has been mere weeks since the inquisitive school pals first discovered the remarkable alien spacecraft hidden underground, and they are still steadily learning more and more about its near limitless power as they venture around the globe in their stealthy ship. As I began reading of their trip to New York in this sequel's opening chapters, I feared Norriss may be resting on his laurels with an identi-kit novel which would neither progress his young characters nor push the unimaginable capabilities of the eponymous extraterrestrial engine.

While Aquila 2 does not take such a status quo-rupturing risk as sending the 12 year-olds into outer space to hunt out the Denebian mothership from which their pod was launched (a tantalising tease in the final chapter, however, does hint that their next trip may be to the moon and back), I was delighted to discover that Norriss was not afraid to expand his character palette to tell a new, albeit earthbound, story.

And so we are introduced to drainage worker Alan – who Geoff takes an instant dislike to, because he is dating the lad’s agoraphobia-cured mother – and his clever son Dunstan, as well as to Tom’s American (girl) friend Paige – who jealous Geoff also has reservations about, because Tom lets her in on their little secret. Much like in the first tale, the plot is slender and perceptibly tailored towards providing a moral lesson to its reader via its growing heroes; this time around we are warned against making snap judgements, because people can surprise you. 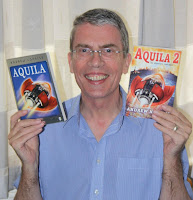 It felt like a bit of a stretch for Norriss to even rope the lad’s schoolteacher’s (who have a far reduced role here) into his neat proverbial bow, but I can’t fault him for trying, while the climatic amalgamation of the Alan/Dunstan and Paige storylines did make me smile, even if the “get out of jail free” explanation was over-elucidated for his pre-teen audience. But I can hardly blame the author for not writing this for someone in their mid-twenties… What can I say; I’m a nostalgic old fool!


In a CR@B Shell: Norriss sticks to his favoured formula with a terse moral-driven plot which delivers a life lesson alongside wondrous adventure. Aquila 2 is a cute enough follow-up, but any future instalments will have to push the lifepod out a little further to not become predictable.
aaaaa
Created by ~ CR@B Howard ~ at 13:02