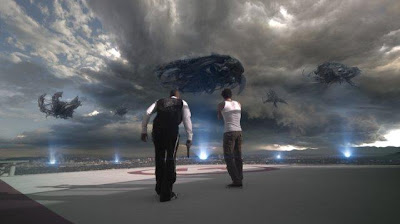 Some films are so heavily documented during pre-production that you even know who the friggin' dish washer in the crew canteen was before you’ve seen a cell of footage or word of dialogue. The Hobbit and The Dark Knight Rises are two recent examples of overexposure caused by internet buzz. Sometimes, however, it’s nice to be caught off guard; to be wowed by a spectacular trailer to a film you’re completely clueless about. This was how I was introduced to Skyline; a smile flourishing across my face as what looked to be a union of Independence Day and Cloverfield played out in front of me.

Of course I’ve been caught out by this “tease(r) of hope” before. Indeed, Skyline’s directorial duo The Brother’s Strause previewed their debut feature Alien vs Predator: Requiem splendidly, only for the finished film to be overly-dark, legacy-soiling dross. But I had hope for their latest release – after all, it couldn’t be any worse than AvP2…. Right?

The critics, alas, were not kind to Skyline, and I feared another sci-fi dud from the sibling’s who made their name as special effects gurus before taking the leap to auteurs. But – hallelujah – Skyline did not disappoint! Okay, yes, so the alien invasion story told through the eyes of the “common man” does owe a debt of gratitude to Cloverfield, while the hovering motherships and techno-organic extraterrestrials do bring District 9’s “prawns” to mind, but Skyline is a slick genre production in its own right, regardless of comparisons. 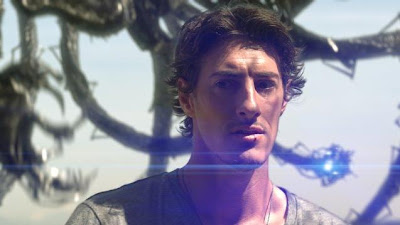 The reason for the people-hoovering invasion is hinted at but never spelled out, while the military retaliation against the light-emitting, human enticing foes is only seen from afar, as a group of survivors – including Turk from Scrubs, aka Donald Faison, and Six Feet Under’s Eric Balfour – hide, plan, escape then retreat from the mysterious threat.

An underground car park getaway provides the jaw-dropping personal highlight in a story which trickles along agreeably, only stalling slightly as the group are forced back into their apartment yet again, while the climatic peak within the bestial Alien-alike chamber of semi-conscious bodies does feel like a bit of a stretch. However, I appreciate the risk for attempting a character arc between Balfour and girlfriend Scottie Thompson.

The forthcoming DVD and Blu-ray package includes a deluge of insight from the Strauss brother’s and the writing double act of Cordes and O'Donnell in a pair of feature-length commentary tracks, as well as bonus commentaries on a number of deleted and extended scenes. Personally, the added character insight these scenes reveals would have benefited the feature – which at just 88minutes including credits was hardly overburdened with flab – but Skyline still works as the sleek and streamlined treat it is.


In a CR@B Shell: The only way was up after the disaster that was AvP2, and Skyline is just that – both literally and metaphorically. Colin and Greg Strause have delivered a taut and glossy sci-fi mini-epic which is inspired without being derivative.
aaaaa
Created by ~ CR@B Howard ~ at 12:59