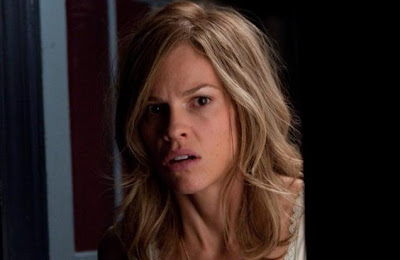 [SPOILERS] Initially earmarked as the iconic horror studio’s tentpole comeback release after nearly 30 years in production hibernation, Hammer Films’ The Resident fell out of favour and was overshadowed by Matthew Reeves’ Swedish vamp remake Let Me In (reviewed HERE), eventually snuck out on home video format* to scarce fanfare earlier this month – despite a surprisingly healthy A-list cast.

Oscar winner Hilary Swank is game for whatever the script asks of her (and it asks her for a couple of nekkid bath shots) as newly SWF Juliet Devereau, an ER doc who moves into an apartment owned by singleton carpenter Max (Watchmen’s Morgan) and occupied by his frail grandfather August (Lee, in a return to the studio that made him).

As Juliet tries her hardest to make a fresh start and get over her cheating ex (Pace), Max seems like the perfect antidote: charming, funny, attractive (well, behind that scraggily tramp beard at least) – but his amiable façade hides a dangerous obsession which turns Juliet’s dream apartment into a living live-in nightmare…

While copious sly peephole shots create a fittingly claustrophobic atmosphere, Antti J. Jokinen’s voyeuristic thriller sadly falls short of success due to its lack of tension and a stripped down, linear plot. Within 10minutes Juliet is already paranoid of every creak and shuffle, and after just half an hour the timeline is reset to show Max stalking her every move, just out of camera.

A couple of doorway glances and a “welcome to the building” basket aside, suspicious August is never utilized as an efficient red herring to his “weak” grandson’s fetishistic perversions. He hints at knowing about Max’s shady activities (“I know everything that goes on in this building”) and he makes hazy suggestions that a troubled, parentless upbringing has lead to Max’s moral deficiencies, but bed-bound August is dispatched before making a discernable dent on the story.

Morgan and Swank spark superbly in the opening clutch of scenes as nice guy Max charms his guarded tenant and romance blossoms, but Morgan is so successful at pulling off cordial and sociable that when he slips behind the walls and puts on his finger-licking, victim-sedating stalker hat you struggle to believe this vicious psychologically-damaged beast is the same sweet character. Beyond schizophrenic, the transformation verges on Jekyll and Hyde in its demands for implausibly contrary characterisation from the man who was The Comedian.