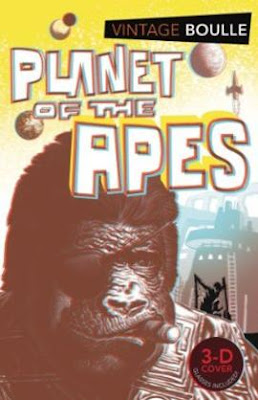 Minute changes like the state of evolution on the upside-down world and character names are to be expected – Heston's astronaut Taylor was initially conceived in print as a mission-accompanying journalist with the very French name of Ulysse Mérou – but a framing devise whereby two lunar tourists find Mérou's travel journal floating in a bottle before they start to read of his extraordinary adventure seems wholly unnecessary – particularly when the “big twist” (that the holiday-makers are themselves chimpanzes) is glaringly obvious as early as page 8 but isn't revealed until the very last page of the book!

While the film runs its allegory to a crushing and iconic climax, Boulle doesn't dare be quite so up-front with his cautionary tale: Mérou and his two cosmo-companions travel to an “Earth-like” planet outside Betelgeuse. When they arrive – following a time-dilating two year flight which actually take much longer outside the rocket's gravitational field – they christen it Soror (a fabricated name which, most bizarrely, is used even when the ape-habitants discuss their world), but despite its similarities to our planet, it is expressly not Earth, and Mérou actually returns home at the novel's close (in a scene which is “aped” in Tim Burton's so-so 2001 remake).

Mute-but-angelic homo sapien “Nova” is present, a character the imprisoned Mérou finds much companionship and solace in, despite her communication deficiencies, and I like that Boulle's Soror human population are naked throughout – as their ape-quilivants are on Earth – although I understand why they had to be more conservative on the big screen. If anything, the Mérou/Nova relationship is the one area in which the novel pushs the envelope further than the film, to much narrative success.

While orang-utan Zaius holds the same beliefs he did in the filmic adaptation (“official science”), his part is reduced on the page and his actions less underhanded. This was the main issue I had with Boulle's writing: it's too scant and ploddingly episodic, with Zauis long gone before compassionate chimps Cornelius and Zire learn of the ruins of a more evolved human civilisation beneath Soror's surface. Without his defiant but close-minded “logic” of preserving ape culture and burying any remnants of mankind's reign, there is little reason for Zaius to so object to Mérou's verbal aptitude.


In a CR@B Shell: It's hard to outright dismiss the novel which inspired such a beloved and long-standing franchise, but while Planet of the Apes does initiate a lot of what makes the film(s) so enjoyable, it is by no means faultless and I was often left with the impression that I was reading the embryo of a fantastic idea which hasn't quite evolved to its full potential yet.
aaaaa
Created by ~ CR@B Howard ~ at 13:16