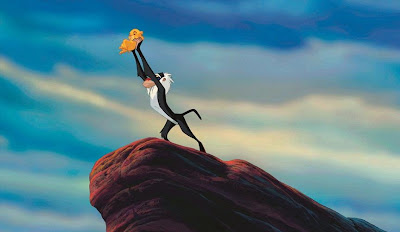 It’s been a good few years since I last saw the 1994 Disney classic – possibly over a decade, in fact – yet it was amazing how much of the dialogue and how many of the Tim Rice/Elton John songs had remained with me as if I had only watched it in recent months. That truly is the mark of a classic, as was the fact that a round of applause filled the cinema as the end credits started to roll – as coincidence would have it, I haven’t witnessed that since Jurassic Park III in 2001; now that’s the circle of freakin' life in just three paragraphs!! 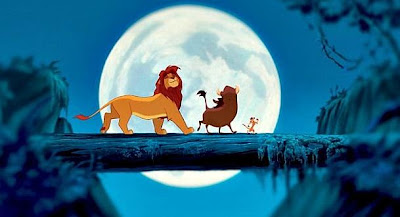 No review – even of a film I’m sure you’ve all seen countless times before – would be complete without a synopsis. In short, young lion cub Simba (Taylor Thomas) flees from his habitat of Pride Rock after his malevolent and embittered uncle Scar (Irons) frames him for the murder of his father, king of the jungle Mufasa (Earl Jones). Living wild with stress-free wanderers meerkat Timon (Lane) and warthog Pumba (Sabella), a face from Simba’s past entices the now fully-grown true successor to the throne (Broderick) back to his home to reclaim the throne which Scar has brought into disrepute by organising an alliance with his “evil” hyena minions.

The shades of Shakespeare’s Hamlet are plain to see; nevertheless The Lion King stands proud on its own merits. The characterisation, depiction and portrayal of the colourful anthropomorphic animals is superb: Musafa is bold and regally intimidating, his hornbill advisor, Zazu (Atkinson), efficient but snotty, sneering Scar is sly and deceitful, while Timon and Pumba bounce off each other fabulously as comic support. Such strength in characters only helps to increase the tragedy which befalls the king as the wildebeests stampede in the gorge at Scar’s provocation. That a family film is so effortlessly able to swing the emotional gauntlet from joy to despair is a testament to Disney’s magical touch.

Of the well known musical numbers, only Scar’s discordant “Be Prepared” failed to win me over or elicit a smile from my lips. It could be because it’s the only song in the film with malicious intent, but I felt it fell shy of conveying that emotion, often coming close to cheesy while discussing truly nasty matters (namely: murder). It also failed to be as catchy as upbeat foot-tapper “Just Can’t Wait to Be King” and the sing-along tickler “Hakuna Matata”, two songs which openly revel in their ostentatious natures.

One thing I did find distracting – through no fault of the film’s own – was that every time Mufasa spoke I instantly thought “Darth Vader”. So symbiotic has James Earl Jones’ deep, booming – and instantly recognisable – voice become to the iconic Sith Lord that it was hard for me to picture him as another character. Having become enamoured with the Star Wars universe following the release of the Special Editions in 1997, I guess this connection was not one I made upon first seeing The Lion King, but it is one it is now evermore stuck with in my mind.


In a CR@B Shell: As epic, funny, dramatic, bold, touching and tragic as it was seventeen years ago, Walt Disney’s The Lion King is a joyous pleasure for all ages which is elevated off the screen and into our hearts by more than the 3D gimmick alone. I could feel the love in the cinema last night and I’d be “lion” if I were to award it any less than five richly deserved ticks.
aaaaa
Created by ~ CR@B Howard ~ at 08:14