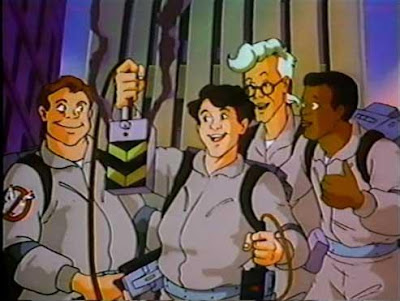 Finally released on Region 2 DVD last year to coincide with the live action film's 25th Anniversary (and the multi-platform video game), this double disc collection of all 13 episodes from The Real Ghostbusters's debut season is a real trip down memory lane for any child of the eighties who used to roam their house in a makeshift proton-pack, zapping all the phantoms in the furniture. Oh – just me then...?

Instantly elevated to the precipice of greatness by the use of that classic theme song by Ray Parker Jnr. (“Who You Gonna Call?” NOT 118!), these further animated adventures of the phantom-blasting foursome (and cheeky glutton Slimer) manage to stay tonally true to the horror/comedy original: a pop-tastic soundtrack (unexpected in a cartoon, but effectively employed) and a heavy helping of humour help to recreate the wit and banter of the cult classic film.

Fan favourite Peter Venkman (Lorenzo Music) – in true Bill Murray style – is the deliverer of bucket-loads of dry sarcasm, but the entire team have their fair share of witticisms, and Slimer is on hand to keep the kids chuckling with a heavy dose of food-related slapstick, much to Peter's constant irritation.

Each episode runs for under 23 minutes, but the well-constructed scripts do manage to pack a surprising amount of ghostly activity, human interest and laughs into their runtime, and there is very little repetition in the paranormal storylines, even if the writers – among them the man who would go on to create Babylon 5, J. Michael Straczynski – are occasionally guilty of falling back on a high-concept plot devise to save the day. Prepare yourself for plenty of high-tech equipment rigging to reverse the polarity of the containment unit's flow and close the interdimensional vortex to another dimensional realm – it's all utter gubbins, but pleasant enough fun.

Despite a rights issue meaning the animators were not able to recreate the exact likenesses of the film's main stars, The Real Ghostbusters still does a superb job of falling in step with the established universe. “Citizen Ghost” successfully retro-fits the continuity following the Buster's filmic battle with Gozer to explain the shedding of their beige uniforms for multicoloured replacements, the rebuilding of their fire house HQ and quite how former foe Slimer escaped the containment unit yet still hung around to wind up the team.

“Take Two” is a giant wink to the audience as the team head to Hollywood to okay a film script about their adventures. Ramis, Aykroyd and Murray – but, interestingly, not Hudson – all get a reference, while Peter openly acknowledges “He looks nothing like me!!” The episode closes on the guys watching actual footage from the 1984 film (albeit with the voices dubbed) at the film's premiere.

In these areas the cartoon is surprisingly well suited to older audiences who will appreciate the nuances and in-jokes – secretary Janine (Laura Summers) still fancies Egon (Maurice Futurama La Marche) and even the iconic Stay Puft Marshmallow Man gets a cameo in “Sandman, Dream Me A Dream” – however, it is a shame that at times the supernatural creations are so blatantly targeted at the toy market; their brightly coloured, infantile and hyperbolic styles sit awkwardly alongside the more realistic human characters. But then, this is a cartoon about ghosts, so I understand the decision to highlight the wacky over the scary, for the sake of young children.


CR@B Verdict: Despite often pandering to its target demographic, fans of the 80's live action films will find plenty to smile about in these above average animated adventures. The UK release is no match for Region 1's stupendous The Complete Collection, but at under a fiver it sure beats waiting around for the long muted second sequel.
aaaaa
Created by ~ CR@B Howard ~ at 04:17