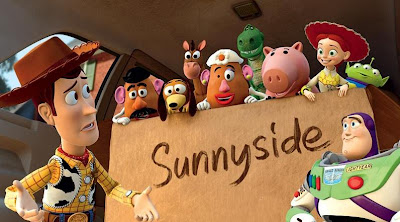 It happens to us all: The toys and games which shaped our childhood and we just couldn’t go anywhere without are more-and-more frequently disregarded and eventually relegated to the bottom of a dusty old toy box as the years pass by, our minds blossom and our tastes mature. This isn’t to say that we don’t have fond memories of our bygone treasures (I still know where all of my Jurassic Park action figures are, for instance: car boot sale be damned!), but playtime just doesn’t mean the same thing when you’re approaching adulthood.

Thankfully, the same isn’t true of films, where the on-screen magic can be revived every time you press play: a time capsule forever preserved on disc (or videotape). Admittedly we do sometimes revisit the movies which had us glued to the screens for endless viewings as we were growing up, only to find the rose-tinted spectacles have discoloured and we’re embarrassed to admit we once fervently enjoyed Muppet Treasure Island (don't judge me), but the true classics, the ones which capture our imagination, tickle our funny bones and stir an emotional connection – of which I am including Toy Story (1995) and its stellar 1999 sequel – will stand the test of time and still enthral no matter how old our mind, body or soul.

Perhaps it is this podiumisation (is that even a phrase? Well it is now) of Pixar's flagship franchise which had the 26 year old me a mite concerned that revisiting Woody (Tom Hanks), Buzz (Tim Allen), Jessie (Joan Cusack) and the gang over a decade after Toy Story 2 may tarnish the precision which preceded it: how could John Lasseter et al better perfection? Would this belated entry be an over-egged plod through stale plot lines? Would Lee Unkrich's first solo shot at directing become The Godfather: Part III of this popular pixelated trilogy? Had Toy Story reached its shelf life?

To answer these doubts as succinctly as I can: no, no and no again – no to infinity and beyond, if you will. C’mon: this is Pixar we’re talking about. Try naming even one of their films which is anything less than glorious? Even my least favourite of their commendable catalogue wasn’t a total Cars-crash, and their first threequel isn’t in any danger of diminishing their brand name. 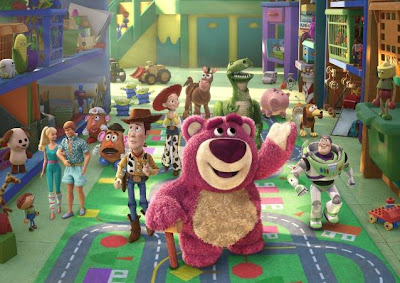 The key to the super-studio’s eleventh feature film’s success is that Toy Story 3 has grown up with its audience, but not shed an iota of its charm along the way: like us, Andy (still voiced by original voice actor John Morris) is no longer the cowboy-obsessed youth with an overactive imagination, but a 17 year old lad on the verge of departing for college. His ever-loyal but depleting assortment of living playthings, shut away in a chest but desperate for attention, are facing the very same dilemma I set out in the opening paragraph: will they be sent to the attic to waste away with the Christmas decorations, get thrown away in the trash or be donated to another home where they will be played with once more? After all, these immortal accessories can't physically grow up – so they are plagued with apprehension over becoming obsolete and unloved.

Adult concerns, then. But fun for all ages. Toy Story 3 is still bright, uproarious family entertainment of the unparalleled quality we have come to know and expect from Pixar, but with a heart which belies the hard exterior of these plastic and vinyl characters. The result is a satisfying whole, a cornucopia or emotions which takes you on that most clichéd of cinematic tropes: a rollercoaster ride. From the adrenaline-pumped highs of a full scale Wild West fantasy (replete with Hamm-shaped spacecraft and Slinky Dog force field) to the heartbreaking lows of a rain-soaked montage revealing what made Lotso-Huggins Bear (Ned Beatty) the bitter and autocratic teddy he has become.

All of your favourite characters get their fair share of comedy highlights (Mr. Potato Head’s resourceful replacement body and Buzz’s default mode are two standout moments); no toy is left behind or overshadowed – except maybe in a fight for your affections – despite an abundance of colourful new faces added to the eclectic ensemble as Andy's mementos are mistakenly donated to Sunnyside Daycare, where “fun” awaits 5 days a week. But will self-appointed over-lord Lotso willingly let the new recruits leave this dystrophic nightmare of hyperactive toddlers, paint pots and glitter sticks? Cue a wonderfully orchestrated jailbreak sequence which is every bit as inventive and iconic as The Great Escape.

Fittingly for this Return of the King of the Toy Story trilogy, the climatic set-piece takes place in an enormous and mountainous junk yard with a giant trash-burning incinerator every bit as epic and ominous as Peter Jackson's visualisation of the lava-filled pits of Tolkien's Mount Doom . It far outclasses Toy Story 2's airport escapade, which always slightly niggled given its far-fetched nature (in a film with living toys; I know...). The moment when the gang hold hands in melancholic acceptance as they edge closer to the flames is a truly adult touch of humanity. Dark, yes, especially for the little ‘uns, but strikingly universal.

On a final note: yes, Toy Story 3 is animated in 3D, but not in a gimmicky lets-jump-on-Avatar’s-bandwagon fashion. There aren’t any marbles bursting out of a bag and flying towards the screen, for instance, but by putting on the Real-D glasses you are granted an added dimension which further brings these sentient inanimates to life and engrosses you in their intricate world filled with everyday dangers; the sandpit really feels like a mammoth trek across Sunnyside’s playground; the vending machine a daunting ascent to the heavens and the encroaching incinerator actually leaves you with a palpable sense of dread. But regardless of how many dimensions you view the film in, there is still much gorgeous detail to appreciate in every captivating frame and you are guaranteed to leave the cinema with a smile on your face, a lump in your throat, a warm glow in your belly and your batteries fully recharged.

Wait – what do you mean only toys have batteries?!


CR@B Verdict: Sublime, joyous, flawless; I could reel off a long list of glowing superlatives for Toy Story 3 and still not state strongly enough just how darn-tootin' good this film is. At the end of the day you just have to watch it for yourself. Repeatedly. With plenty of tissues.
aaaaa
Created by ~ CR@B Howard ~ at 11:38