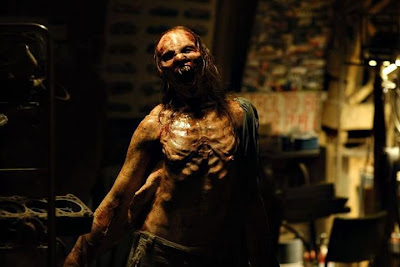 Just when you thought the vampire sub-genre had been sucked dry from over a century of diverse fictional incarnations and dubious neutered interpretations (I’m looking at you, fangless and glittering preeners of the Twilight saga), along comes a fresh and ferocious take on the UV-phobic neck biters to inject the undead spawn of Bram Stoker’s mythical archetype with a transfusion of cool. And make no mistake: the Spierig brother’s future-set sci-fi/horror hybrid is bloody cool.

Set in a monochromatic 2019 where the last remaining scraps of humanity are being hunted down and farmed for their plasmic juices in a multi-national pharmaceutical laboratory run by the new and untanned master race, Daybreakers pits heartbeat-sympathiser haematologist – he who searches for a synthetic blood substitute – Edward Dalton (Ethan Hawke) against his own claret-starved kind when a pocket of human survivors led by Audrey Bennett (Claudia Karvan) and formerly-fanged Lionel “Elvis” Cormac (Willem Defoe) prove to the doc that there is a cure to reverse the vampiric plague and save the mortal race…

What impressed me most about this dark, stylistic future shocker was the Spierig brother's creativity with the subject matter and their striking attention to detail. Writer and director team Michael and Peter really immerse you in their apocalyptic world which comes alive with the undead when the sun goes down. Car windows are blacked out and fitted with roof-fitted cameras to allow for daytime driving; labyrinthine underground walkways provide a safe way to get about town without getting sunburn; brigades of gun-totting human-hunting soldiers are deployed to find food, without which the blood-gluggers slowly degenerate into hideous bat-like Subsiders (gloriously reminiscent of the creature Gary Oldman transformed into in 1992’s Bram Stoker’s Dracula). As I said before: bloody cool.

However, the cure (to death?) discovered accidentally by “Elvis” should be taken with a water tower's worth of salt. It’s incredulous bunkum, even in a genre flick peopled by pulseless immortals, but it is adequately sufficient as a plot device to progress the relentless action as malevolent corporation president Charles Bromley (a wonderfully snide Sam Neill) sets about quashing Edward’s resistance, hiding any hint of a cure and mass marketing the synthetic blood substitute for major profit. Cue a dramatic blood-bath finale which is only dampened by a slightly hasty feel to the epilogue. 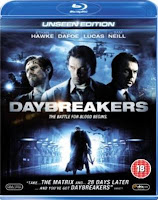 It is hard for me to believe that a film with such a wickedly inventive premise took nearly 6 years to reach our screens, from Lionsgate acquiring the rights to the script way back in November 2004. But then this is a modestly budgeted Australian production – the State Government even contributed to the $21million raised – with the Spierig brothers having only one previous feature to their name (2003’s little known Undead). That being said, after watching their sophomore effort, I am very excited to see what the brave and imaginative duo create next. Daybreakers is a slick, spirited, sharply-scripted supernatural shocker which delivers on action, chills and gore (hence the 18 rating on this “Unseen Edition” home release) with a sly allegory on man’s profligate attitude to natural resources slipped in for good measure.

CR@B Verdict: Overlook the logic-vacuum of the “cure” & you’ll be treated to an hour and a half of blood-pumping action, spine-tingling horror and car-chase thrills. An atmospheric near-future creature feature with balls, bats and Sam Neill – what more could you ask for?!
aaaaa
Created by ~ CR@B Howard ~ at 09:30