Ode to a Rowling Yarn 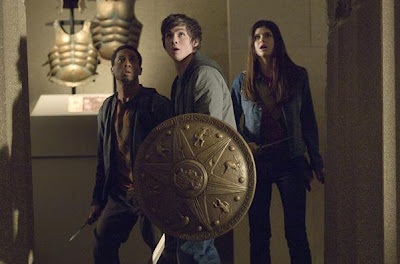 A jumble of A-list Hollywood thesps play second fiddle to spellbinding CGI wizardry and a gaggle of up-and-coming youngsters contending with domestic woe, stacks of homework, the onset of puberty and saving the very-world-as-we-know-it in the origin story of this thinly veiled walkthrough of The Hero’s Journey, adapted from a multi-novel tween fantasy saga by director Chris Columbus.

Anyone else getting an uncanny sense of déjà vu?!

I’m surprised they didn’t go the whole hog(warts) and rename this multi-million dollar franchise kick-starter The Chronicles of Eragon Potter & the Copyright Thief. Frankly, it would have been more subtle than this sign-posted video-game quest around modern American and beyond, as the 21st Century - iPods, pop music et al - clashes awkwardly with the mighty tunic-wearing gods of Mount Olympus .

The catalyst to epic adventure in novelist Rick Rirodan’s series is that Zeus’s (Sean Bean) iconic lightning bolt has been stolen, and he is pointing his giant finger of blame at brother Poseidon’s (Kevin McKidd) earthly son, Percy Jackson (Logan Lerman), who is completely unaware that his father is the god of the ocean and that is the real reason why he suffers from dyslexia and ADHD and can survive underwater for seven minutes without breathing. If only that were true of everyone, huh?

A mere moment after his godly heritage is revealed to him and he is rushed from a confrontation with "Archetypal Enemy Test #1" to the woodland safety of Camp Half Blood , Percy is ready to take on anyone or anything. Accompanied by his Satyr – that’s the PC term for a half man, half goat – protector and best mate, Grover (Brandon T. Jackson), and future love interest, Annabeth (Alexandra Daddario), Percy must battle a medley of mythological monstrosities on his way to collecting a trio of Persephone’s pearls (handily deposited around the US & highlighted on a Maraude- sorry, magical map), to gain access to and from the Underworld and prove to Hades (Steve Coogan) that the eponymous demigod has not stolen Zeus’s phallic MacGuffin, so can he please release Percy’s imprisoned mortal mother (Catherine Keener) and not fuel an epic war between the irritable Grecian beefcakes? 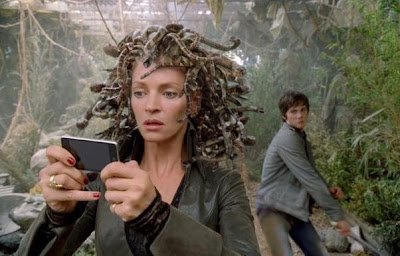 As you can imagine from such an overblown and longwinded plot, this film cuts out any surplus character set-up in the name of a bum-friendly runtime. As a result, the pre-reveal backstory of the Ordinary World passes in a hyperactive blur (ironic given Percy’s affliction) of winged Furies, goat legs and Minotaur attacks, which the character accepts and adapts too a little too smoothly. Once the trio are on the road and free of disabled-professor-come-centaur Mr. Brunner (Pierce Brosnan), the pace is relentless, fizzing from dizzying set-piece to set-piece as Uma Thurman’s icy Medusa and a multi-headed Hydra are despatched far-too-easily by the teen’s newly acquired pen-sword, water-commanding superpowers and some strictly choreographed teamwork, on their way to the Underworld, the entrance to which is located underneath the Hollywood sign…

One ordeal of note is the teen’s stop off in Las Vegas , where the lair of the Lotus Eaters is masquerading as a high-end casino. The trio are bewitched by the spells secreted when they eat the exotic flower, intoxicating them with an urge to stay and gamble their lives away. This was a commendable scene for a child-targeted mythological fantasy flick, given the obvious allegorical parallels to the danger of drug abuse and gambling addiction (all set, predictably, to Lady GaGa’s mega-hit “Poker Face”). It certainly made me sit up and take notice, even if the change of tone made the scene feel totally out of place sandwiched between encounters with the archetypal enemies of old.

I hope I haven’t mislead you, dear CR@B fan, into thinking I could barely tolerate Percy Jackson & the Lightning Thief? Granted, it is unashamedly hackneyed and there were some groan-worthy moments along the way (the licences taken with Greek mythology did induce a number of eye rolls). However, if I am to take this adaptation for what it is then it is far from a failure; and let’s face it, I’m hardly the core audience. It was predictable, effects-reliant nonsense, sure, but adequately entertaining predictable effects-reliant nonsense. It didn’t break any new ground, but I did break a smile on a number of occasions, particularly when cocksure Grover was wisecracking. Plus, any film where Steve Coogan is playing Hades as a leather-clad send-up of Mick Jagger has got to be worth at least a rent.

I can’t get no satisfaction; but my expectations were pitched as such that I wasn’t dissatisfied by Chris Columbus’s Potter-lite fantasy/adventure, either.


CR@B Verdict: A fun if formulaic piece of fancily-decorated, family-friendly fluff. Percy Jackson adequately ticks all the right boxes but falls far short of capturing an ounce of the wonderment of J.K. Rowling's juggernaut it is so heavily derivative of.
aaaaa
Created by ~ CR@B Howard ~ at 09:41