To Obsession, And Beyond!

I'm not ashamed to admit that some of my tastes in the visual arts incline towards what most may call geeky. Star Wars, Star Trek, Red Dwarf, The Hitchhikers Guide To The Galaxy, Dawn of the Dead, Jurassic Park... What can I say: I've got an imagination! And yet, in my 26 years upon this mortal coil, I had yet to set foot inside the ultimate nerdy grail: a science fiction convention. This was all about to change on Sunday November 7th 2010 A.D. when I attended the Norwich Sci-Fi Festival 2010.

I reluctantly decided to leave my lightsabre and Jedi robes at home, and so, kitted out in a slightly more culturally acceptable Kryten t-shirt, I set out to meet such genre luminaries as Chris “Arnold Rimmer” Barrie, Norman “Holly” Lovett, David “Darth Vader” Prowse, Kenny “R2-D2” Baker, Warwick “Willow” Davis, some shockingly questionable Doctor Who “lookalikes” and some guy in a union jack mask who wasn't afraid to flaunt what he had in a white lyrca bodysuit – oh dear god, that's one image I'll never be able to mind meld away...

Taking place in the LCR on the campus of Norwich's UEA, a multitude of stalls selling all manner of both new and second-hand memorabilia cluttered the main room like a Tattooinian market peopled by rubber-masked B-movie rejects, with the stage area being used sporadically for question and answer sessions throughout the day. The back room, adjacent to the cafeteria (classy), was where the meet and greets and autograph tables were situated. 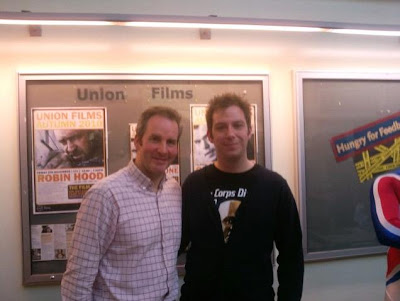 As big a Star Wars fan as I am, I will admit that the main draw of the day, for me, was to meet two members of the Red Dwarf crew, and this was clearly a feeling shared by many an attendee as Chris Barrie's queue was about a parsec longer than any other celebrity. Who's the goit, now?!

I was a combustible combination of giddy and nervous as the queue edged ever-nearer to Second Technician Arnold Judas Rimmer Bsc. (Bronze Swimming certificate): after all, Chris Barrie had been sat at this table all day, forced into making pleasantries with all manner of crazed fanatics. Exactly what could *I* say that he hadn't heard a gazillion times before?

“Where's your H?”
“Alright, Smeeeeeeegggggggg Heeeeeeeeaaaaaaaaad?”
“If you're a hologram with a soft body light bee, how can you lay on a bunk?”
“You were great in Tomb Raider”

As it turned out, I simply made basic and polite conversation in a self-degrading fashion (“I don't have a clue what to say to you except: I love Red Dwarf...” etcetera) before chastising Norman Lovett for chewing on a digestive biscuit while posing for a photograph (highlight of the day? Methinks so) – I'm sure the senile sat nav loved me for that one...

I decided not to pay the extraordinary prices for getting a photo signed by David Prowse and Kenny Baker, instead making do with the mental picture of watching the man who is Darth Vader eat a ham salad from a paper plate with plastic cutlery – talk about destroying the movie magic!! I'll never be able to watch the Cloud City intervention scene from Empire again without imagining the Dark Lord of the Sith struggling to poke a cherry tomato through the grates in his mask... 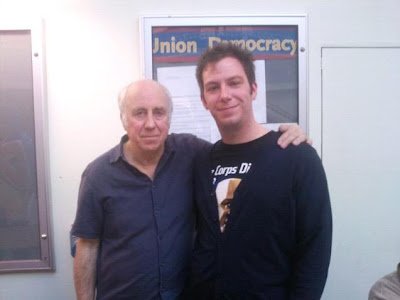 I realise that this event was by no means in the same league as Collectormania or Comic-Con, but as a first taste of convention conventions, it was certainly an eye-opener – and not in a good way. Watching Warwick Davis (and his young and bewildered son) struggle to drum up crowd participation during his Q&A (read: biography promo) while a stall vendor stared daggers at a child for daring to touch his Thunderbird 2 toy (that isn't a euphemism, thankfully) just made me feel incredibly awkward.

I understand that these celebs make a tidy profit from schmoozing with their fanbase – some have clearly made a living from it since their 70's heyday – but I couldn't help but think that they must be monumentally bored by the benile “banter” and false, lifeless smiles as they pose for endless photo-ops. At least there's an element of surprise if you happen to bump into a famous face shopping in Oxford Circus, rather than the monotony of seeing them rush through a line of anticipating fanboys before their ham salad arrives.

It would be futile to give an event such as this an “out of five” rating as there was no product or performance for me to judge, but to sum up my feelings: I wouldn't go so far as to say I regret going to the Norwich Sci Fi Festival 2010 (it was only a fiver for a ticket, after all), and I had a real laugh (if for all the wrong reasons). I honestly did enjoy seeing some of my (greying) heroes of the screen in the (wrinkly) flesh, but it was all a bit too much for me. Perhaps I'm simply not the geek I thought I was...?
Created by ~ CR@B Howard ~ at 14:02