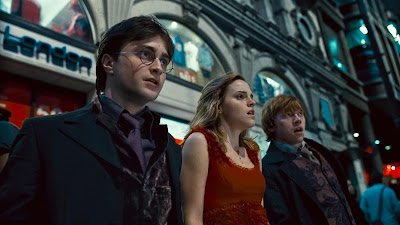 [SPOILERS*] With an adaptation as colossal and anticipated as Harry Potter – the concluding novel, no less – you are never going to please everyone. From exorcised scenes and streamlined plot points to suspiciously missing characters and limited screen time for big name stars, someone will always find something in director David Yates’s big screen interpretation which doesn’t quite align with their vision of J. K. Rowling’s mammoth seventh tome.

Prior to viewing the film last night, I had cautiously read a couple of reviews – both from reliably renowned mainstream publications, both with ruthlessly average final verdicts – which picked up on Deathly Hallows Part One’s lack of structure in comparison to the previous Hogwarts-framed instalments. Well, ummm, yeah, well spotted Total Empire, that’s kind of the whole point of this story!

Following the death of his wizened headmaster at Half Blood Prince’s downbeat climax, Harry Potter (with ever-loyal bezzie mates Ron Weasley and Hermione Granger in tow) leaves behind the comfort of the enchanted School of Witchcraft and Wizardry to survive in the harsh terrain of a real world which is out for his blood, all the while searching for seven Horcrux McGuffins which contain segments of the soul of his deadly arch nemesis.

This isn’t a Quidditch match against Slytherin where no matter how awkwardly you fall off your broom Madame Pompfrey will be present to mend your broken bones: this is serious, this is dark and this is depressing. The kids have grown up (note the six o’clock stubble, hormonal outbursts, and – during one nightmarish divination – a topless clinch between Harry and Hermione), their guiding lights have been extinguished and their families far away – the cruelties and mysteries of the outside life are present for them to battle and demystify all by themselves. 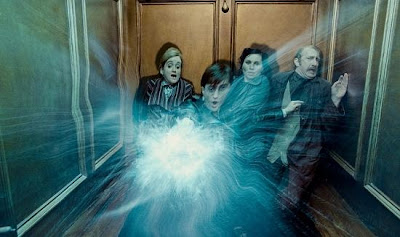 Surely, if indeed there is a lack of structure then it is fully intentional: on the cusp of adulthood, these kids are thrust into the biggest challenge of their already taxing lives, totally unsure of how to progress. They’re outcast and running blind with no clue of where to search, what the Horcruxes look like or how to destroy them and weaken He Who Shall Not Be Named. It’s all luck and guess work, but still they soldier on against the odds.

Thus, tempers are rising, mistakes are made and wild goose chases ensue; but they still have a purpose, and with Voldemort’s evil army growing ever stronger and even the once impenetrable Ministry of Magic falling foul of his Pureblood propaganda, it is comforting to know that there are still two people Master Potter can trust – even if it clearly isn’t film critics…

I couldn’t help but smile knowingly at scripter Steve Kloves’s numerous call-backs to previous adventures, truly knitting the saga together like never before, none more so than when House elf Dobby reappears after four film’s absence, sporting a dirty pillowcase gown and pair of trainers. But parents of young Muggles be warned: this is not a cuddly and sweet tale and any humour and joy is soon overshadowed by darkness.

Brace yourselves for backstabbing, treachery, destruction, torture, disfigurement, bloodshed and more deaths than you can shake a wand at (one of which, in particular, upset me more on screen than it did on the page). The film’s colour palette is varying shades of grey and the atmosphere is cold, inhospitable and full of despair – even Bill and Fleur’s colourful wedding celebrations are marred by a Death Eater attack.

Yet despite the unrelenting fear and hopelessness, Harry Potter and the Deathly Hallows Part One is still a thoroughly enjoyable experience. You become so caught up in this fully realised world that it never feels like the film is dragging, or that too little of the

story is being stretched to breaking point. Ignore any mad-eyed and moody journalists who disagree. Indeed, a number of uproarious and high-octane set-pieces splendidly counteract the subdued consternation of the Horcrux hunt.

With the credits rolling on a cliffhanger which hangs in Voldemort’s favour, I for one cannot wait to see how David Yates surpasses this emotional extravaganza with Potter’s final bow next summer.