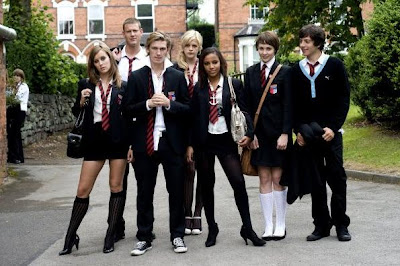 The age old morality tale of the underdog triumphing over the dominant alpha clique is given a supernatural makeover for the noughties teen market in this high school Brit horror-com. Thus, Tormented stars a raft of former Skins starlets in short skirts, an abundance of bad language, witty banter, sex, booze, blood and gore, as overweight loner Darren “Shrek” Mullet (Calvin Dean) is pushed to the brink of depression following years of bullying, and commits suicide.

Questionable subject for a comedy, you may think, and I certainly agree. There are times when the devastating enormity of the all-too-real situation – particularly when we watch mobile phone footage of his savage victimisation at the hands of the school's “cool kids” – does offset the sarcastic tone which underlies the slapstick horror, but it's hard to hold on to your principals when Mullet's reanimated corpse starts to exact revenge upon his tormentors in a number of fiendishly outlandish ways.

But as gore-iously inventive as they are, there's no real satirical slant to any of the murders, which does mean that things become a little repetitive as the runtime progresses: Death, panic, death, panic, death... etcetera. And as hurtful as their teasing was, whether the band of peer pressured adolescents *quite* deserve the fatal comeuppance they receive (does one wrong turn deserve another?) dissolves into a moot point as the body count spirals out of control and even Mullet's only friend falls foul of the hell bent zombie.

The film's moral commentary is further muddied when Darren's secret crush, cute-and-proper Head Girl Justine (Tuppence Middleton), is also targeted (and her punishment far more drawn out) because she “dared” start a relationship after the deceased shy guy who fancied her from afar never plucked up the courage to ask her out when alive. Is that fair? Really?

For all of Tormented's broad cultural stereotyping – jocks, sluts, emo punks, geeks, prissy virgins – it must be said that writer Stephen Prentice does a spot on job of depicting the power struggles which occur in Britain's state schools. I only hope that the same is not true of the horrendously inadequate teachers (one of whom is as big a bully as his pupils), or the suspiciously absent parents, but it probably is, and probably explains why the young 'uns are such first class idiots to begin with.


In a CR@B Shell: A confusing lesson in life, but for all of its ethical quandaries Tormented does deliver a wild n' wacky slant on an archetypal concept. Its teen demographic will find little to groan about as limbs and bras go flying and the laughter count is sustained throughout.
aaaaa
Created by ~ CR@B Howard ~ at 12:22