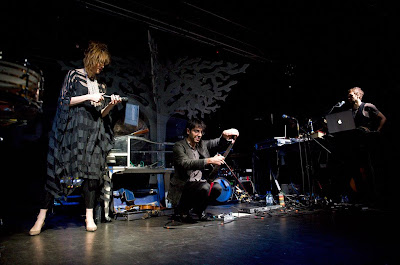 Stopping off at the Waterfront in Norwich on the latest leg of her seemingly never-ending Ellipse World Tour (next stop: Europe, before finishing up in South Africa!!), the incomparable one woman band Ms. Heap may very well have delivered the best gig I have seen her play yet (this being the third time I have seen her live since early 2007).

I say “may” because the performance was spoiled for me by two incidents in the throng of the crowd. Neither of which were Imogen’s fault, but as any gig-goer will know: the venue's atmosphere can either make or break a gig, and when a trio of crude, ignorant and mouthy chavs are stood close by you drinking, swearing and mouthing off at anyone who would dare ask for quiet during an acoustic number, it doesn’t half wear your enthusiasm for the music down.

Thankfully, some five songs in, the three must-be-twats were either ejected or moved to a dark corner to question the logic in paying nearly twenty quid to attend an intimate gig only to yak disrespectfully over the performance. Alas, the damage had been done and it took me a while to get back into the spirit of the evening, only for another member of the crowd to faint on top of us some three quarters of the way through.

Please don’t misinterpret my irritation: I am in no way blaming the poor girl for blacking out (how inhuman do you think I am?!) and I’m sure her and her partner’s evening was thoroughly ruined by the unfortunate incident, but the flash of panic as someone lays unconscious on the floor a foot away from you takes some getting over – after all, this isn’t a Michael Jackson world tour where fainting fans being crowd-surfed to the safety of the security staff is a regular occurrence (seriously, check out the crowd shots throughout the Dangerous Tour in Bucharest DVD – the first aiders must have been rushed off their feet!!).

Getting back to last Sunday's on-stage activity, I was thoroughly impressed by the set-list, which Immi proclaimed was voted for by fans online prior to every stop of the tour, thus what she was playing was exclusive to Norwich. “Come Here Boy”, penned at the age of just 16 and committed to disc on 1998’s debut iMegaphone, and “Let Go”, from the oft-overlooked Frou Frou album and made famous by its inclusion in Zach Braff’s Garden State, gave a broader range to the song choices, although there was still room for firm favourites “The Moment I Said It”, “Just For Now” and “Hide & Seek”, which naturally rounded off the encore with a crowd sing-along.

Given the intricate depth to each of Imogen’s various compositions, she once again brought back her hard-working support acts – acoustic guitarist and "noise-maker" Ben Christopher and hauntingly inventive violin duo Geese, both of whom I can recommend – to lend a hand in bringing her multifarious recordings to life live on stage.

The perils of recreating such complex and technologically-reliant tracks were brought to the fore when an attempt to record (and then loop) a string melody for “Let Go” was thrice halted and only resolved when Immi’s wrist-mics were used in lieu of the more traditional handheld voice amplifier. Thankfully her (non-chav) fanbase are a patient enough bunch and were happy to listen to her scatty-but-amiable banter and random anecdotes while the technician’s scratched their heads under the sweltering heat of the impressive stage lighting.

Personal highlights for me were the impressively-layered construction of “First Train Home” from wine glass rim sound effects to complete track before our ears, main-set closer “Tidal” – for which Imogen donned a pair of Kanye West shutter specs and a white key-tar to rock out for a funky extended riff – and Speak For Yourself’s “Goodnight And Go”, likewise extended with a rock-fuelled middle eight replete with a heavy drum solo (and repeated with the lights out to showcase the temperamental instrument’s amazing touch-sensitive light show).

Never one to rest on her laurels, Imogen’s Norwich exclusive set-list was a perfect mix of crowd pleasers and fan favourite album tracks: 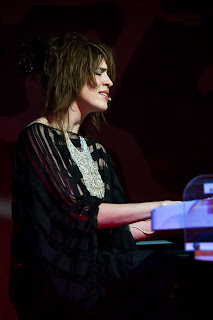 
In a CR@B Shell: Crowd frustration aside, the musician’s musician put on yet another stunning and crowd-pleasing performance. This was an elaborate and diverse set with Immi in high spirits off the back of selling out the Royal Albert Hall 2 nights previous.
aaaaa
_________________________________________________
All photos from http://www.shakenstir.co.uk/ review of Imogen's Liverpool gig, which you can find HERE. All credit where due, no copyright infringement intended.
Created by ~ CR@B Howard ~ at 12:50