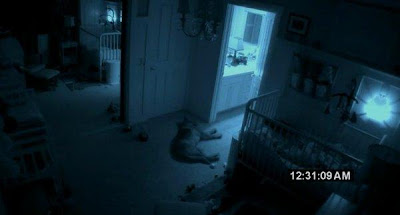 [SPOILERS] Last year’s Paranormal Activity was a monster hit in both respects of the phrase. Made on a miniscule budget in one location with a tiny crew and unknown actors, Oren Peli’s supernatural psychological horror was a genuinely distressing affair which left audience’s utterly petrified, without depicting anything more than a crumpled old photograph and a smashed picture frame. God, we’re such wimps!

Given the overwhelmingly positive word of mouth and humungous box office returns, a follow-up really was a no-brainer, even if Katie (Featherstone) and Micah’s (Sloat) story had rather abruptly come to a close. But this wouldn’t be Hollywood if they weren’t able to find some “ingenious” way to capitalise on their properties and squeeze as much money from the brand name as was (in)humanly possible.

So just twelve months later Paranormal Activity 2 takes a bow at the Halloween 2010 box office, although it’s technically a prequel to the original (a bug bear of mine given the numeric implication it is second in the sequence…), expanding upon Katie and Micah’s woes by introducing us to Katie’s sister, Kristi Rey (Grayden), whom we are already aware was plagued by a supernaturally paranoid upbringing.

Presented in an identical handheld/security cam style of “recovered” footage (again without titles or credits, adding a chilling sense of realism by not taking you out of the diegetic reality), this sequel documents the homecoming of Kristi and husband Dan’s (Boland) newborn son Hunter with snapshots of his first months, but the pace slows when the family’s house is broken into (or so they presume) and surveillance cameras are installed to catch any future culprits.

What the hidden cameras detect is far more disconcerting than a random ransacking, however, as pool cleaners miraculously elevate out of the water, Hunter’s baby mobile spins of its own accord, Dan’s teenage daughter Ali (Ephraim) is locked out of the house by a phantom gust of wind and the family’s German Shepard, Abby, is hospitalised after an attack from thin air.

Ali is in equal parts fascinated and freaked by their haunted house as she scours the internet for answers which only hint at the bigger picture, while events take an unsettling slide into the demonic when Kristi is violently dragged by the malevolent spirit into the cellar and re-emerges vacant and unresponsive but with a worryingly protective attitude towards her baby son…

Okay, I’ll admit it: Paranormal Activity 2 was, like its predecessor, a truly tense and jumpy horror. It freaked the hell out of me for hours afterwards; particularly Kristi’s unsettlingly possessed bawls. It was also a remarkably unifying film in that the audience I saw it with seemed to react in harmony with one another. Strangers from across the cinema were calling out in agreement when people screamed or laughed at a faux-thrill. Normally this behaviour would irritate the crap out of me, but in this case it just confirmed that this horror was a resounding and unparalleled success.

But – and this is the crux – as competent as the scares were, at the back of my mind was the niggling query: is this film really necessary? It was clever to interweave the narrative with the original story, granted, but the reasoning for inflicting the original film’s events upon sister Katie was a tad laboured to say the least.

Ultimately, however, this sequel didn’t bring anything new to the table, either: things go bump in the night, again, household appliances move, fall and turn themselves on, again, doors spring open without being pushed, again, a character consults – but ultimately ignores – a ouiji board, again, someone gets pulled forcibly through the house by their leg, again... But other than the family’s housekeeper burning incense and chanting, nobody makes an exerted effort to exorcise the baby-fixated blighter!

Disappointingly, nothing is made of the iconic trailer climax with Hunter visible in the mirror but not in his cot. Furthermore, nothing is made of the creepy message scrawled on the glass, and the often-used image of a hooded Kristi (or is it Katie? Irrelevant now) standing ominously in the nursery doorway is also nowhere to be seen in the film. All this intrigue and mystery

came to nothing; a fantastically tantalising trailer which did its job in getting the fans talking, but was ultimately packed with a raft of red herrings...

Surprise, surprise, the actual film’s conclusion was left open for more (and given the opening weekend gross, it is looking more and more likely), but I just hope that Paranormal Activity doesn’t become the new Saw with a new, ever-diminishing entry every Halloween. There are only so many times that an invisible enemy can freak out a cinema full of punters by dropping a pan from a kitchen rack before the paranormal becomes predictably normal.


In a CR@B Shell: Just as frightening as the original, if hardly breaking any new ground in expanding upon Katie and Micah’s story. A sleepless night will follow, but please, Paramount , don’t make a third…
aaaaa
Created by ~ CR@B Howard ~ at 12:00