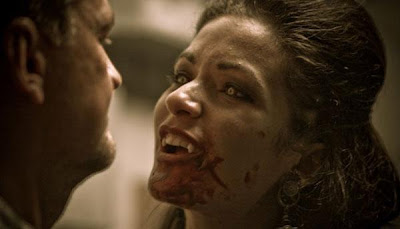 It's a novel idea for a genre mash-up, I'll give the horde of contributing writers that: Cockney gangsters take on Romanian vampires in the battle for a gentleman's club built on cursed land. Fist fights, firearms, funbags and fangs – it could have been a feast of frightening and frenzied fury. Shame, then, that Dead Cert is a disjointed and occasionally unfocused affair which at times verges on the dull. A case of too many cooks maul the broth, perhaps...?

Such promise – especially with an 18 rating – but we barely get a flash of fang for the first 45 minutes. Whereas this surprise supernatural reveal worked wonders in From Dusk Til Dawn (1995), director Steve Lawson's long game approach just comes across as painfully slow to get going. Furthermore, when the ironically renamed club Inferno finally explodes into a deadly bloodbath, the shift in gear feels distinctly contrasting in tone.

Steven Berkoff plays the clichéd “madman” whose rabid warnings of death to all who cross the legendary “Wolf” go unheeded until the club is painted claret. The film's backstory - which stretches across the globe and dates back 500 years (even Jack the Ripper is dragged into the mix) - is so convoluted that it requires a double page essay in the booklet to help explain things, despite the Wolf/Livienko mystery being painfully obvious.

It doesn't help that Billy Murray is an incredibly weak central villain, much less Romanian vampire. True, he is meant to be more deadly than his distinguished appearance suggests, but I am so used to seeing him as an honourable copper on The Bill that it is seriously hard to fear him as an imposing figure. When Freddie questions Livienko's lack of an Eastern European accent you can't help but think “miscasting cover-up”.

For all this Britsh horror's flaws, I was impressed by how the undead were not simply demonised blood-hungry husks when they reawaken: Ricky 'Orrible Grover is so devastated by his new existence that he stakes himself, while – SPOILER ALERT! – Dennis retains brain damage in the afterlife from his fatal final fight. Sadly, the minute the neck-biters open their mouths they sound like Stephen Hawking on autotune and all suspense evaporates.


In a CR@B Shell: With such a mouthwatering Underworld-meets-Underworld concept, it's a shame that Dead Cert is such a boring clash of hardcore genres. Things liven up in the second half, but the mythology suffers at the fangs of hyperbolic gore.
aaaaa
Created by ~ CR@B Howard ~ at 16:38