Mirth of the Living Dead 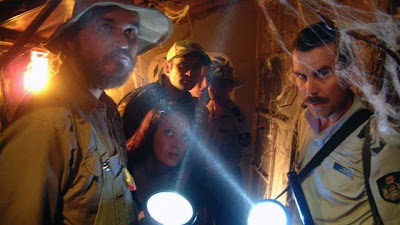 Meteor showers, acid rain, a zombie uprising, killer fish, ghostly apparitions and alien abductions – you certainly can’t accuse the Spierig brother’s first feature of being uneventful. But anyone – myself included – watching this wild Australian horror in the wake of their 2009 breakthrough hit Daybreakers should not be expecting a tonally analogous ride. Pity, then, that Anchor Bay recently repackaged the film with a misleadingly dour cover...

Whereas the twin auteur’s future-set vampire apocalypse was a furiously severe and sombre horror, 2003’s Undead is a madcap tongue-in-cheek affair which packs as many laughs as gloriously embellished deaths into its 100 zany minutes. Strictly speaking it’s not a parody, although Michael and Peter do little to disguise their “splatstick” influences: this is essentially The Evil Dead (1981) mating with Bad Taste (1987) in George A. Romero’s cellar.

You can therefore be certain that you won’t be able to keep a straight face as the townsfolk of fishing community Berkeley start developing a taste for brain matter and a spiky extraterrestrial barricade quarantines the human survivors alongside their undead neighbours. Mungo McKay camps it up as the eccentric outsider Marion who is never short of a gun or twelve, leading the shabby mortal resistance against the torrents of supernatural activity.

Just when you think Undead can’t possibly get any wackier, the Spierig brothers throw in another comic book nemesis for our wearied protagonists to battle, bludgeon and behead. It’s all farcically over the top and riotous fun, but the busy plot does begin to feel rather scattershot in its approach, as if a multitude of genre elements are being shoehorned in

just for the sake of it.
Nevertheless, anyone who fancies a chortle at a pair of bodiless legs stumbling aimlessly in search of a torso is in for a treat: Undead is unquestionably a tour de force of carnage and comedy. Lamentably, as the credits rolled I was left with a prevailing sense of frustration, trying desperately to work out how the haphazard plot strands pulled together to reach such a crazy conclusion. Perhaps I was paying too much attention…?


In a CR@B Shell: More farcical than frightening, Undead is a hyperbolic homage to old school horror comedy which is best watched in a braindead, booze-addled state.
aaaaa
Created by ~ CR@B Howard ~ at 05:54