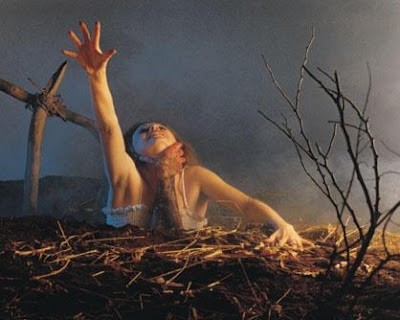 I have been on something of a horror movie binge of late. Given the time of year, it is somewhat apt that I should be viewing as many schlocky scare-fests as possible. But as easy as it would seem to splash around the claret and the prosthetic limbs and proclaim “THIS IS THE SCARIEST FILM OF ALL TIME!!!”, many modern genre flicks just come across as humorous rather than horrific. Sometimes, dear Hollywood, less is more.

One classic example where this adage is definitely not the case, however, is Sam Raimi’s seminal video nasty The Evil Dead. Approaching 30 years old, the restored and remastered recent Blu-ray release (out just in time for October 31st – coincidence much?!) gave me a perfect excuse to finally check out this iconic landmark in extreme X-rated entertainment.

And please indulge me with this outpouring prior to the review proper, but ohmygoodgod what a furious, fun and freaky thrill ride this monster of a movie is! Why did it take me 26 years to finally watch this? How had I not sought this out sooner? How quickly can I get hold of Evil Dead II and Army of Darkness?!

Admittedly the film’s plot, by today’s jaded standards, sounds rather corny and contrived: a group of college students head to a mountain retreat for a weekend of sex, drugs and rollicking laughter, only to inadvertently unleash hell on earth when they discover the flesh-lined Book of the Dead and listen to the recorded research tapes they find in the isolated cabin’s cellar; freeing a horde of supernatural beasts by replaying the demonic incantations therein. 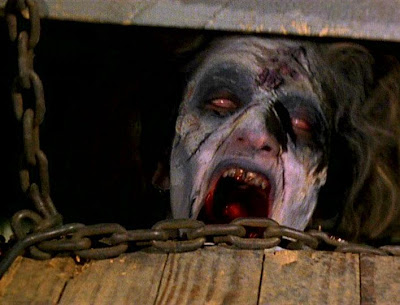 It really is the simplest of set-ups, but from the moment cynical sketcher Cheryl (Sandweiss) is lured into the forest and brutally raped by the trees (yep, you read that correctly), you know you’re in for an insanely intense and shamelessly excessive hour and a half. The five students – bar Bruce Campbell’s cult-hero everyman Ash – are one-by-one possessed by the so-called Kandarian demons and go on psychotic rampages in an attempt to spook then infest their mortal pals.

Just when you think you’ve seen enough maniacal madcappery to last you a month of Halloween’s, Sam Raimi takes things a step (or stone staircase) further – from obliterated bodies still quivering on the floor to eye gouging, beheading, fire poker impaling and hands being chewed from their arms – but all with a wickedly black sense of humour. I found myself roaring with laughter just as often as I was wincing at the frenzied imagery.

The otherworldly make-up is as outrageously cheesy and unsubtle as the action, with the possessed “deadites” looking like face-painted kids after a birthday party food fight, and a stop-motion climax does expose the film’s age in these overtly smooth high definition times, but the attention to detail and Raimi’s budget-restricted dedication to throw everything and the cellar’s film projector at the audience is simply inspirational and must be marvelled at to be believed. 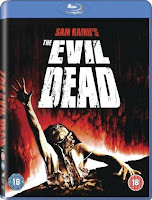 The Evil Dead is certainly not for the easily scared, queasy or offended (I did mention the tree rape, right…?), but against your better judgement you’ll find yourself utterly engrossed in the vile chaos, if only to find out how far they’ll take things next. As Raimi’s first feature film, this is an amazingly proficient accomplishment with the auteur maintaining a persist level of tension and showing off a slew of effective directorial techniques (particularly the P.O.V. presence of the roaming spirits). And to think, the best is yet to come (and no, I don’t mean Spiderman 3…).


In a CR@B Shell: Sure, some of the effects have dated, but even in 2010 The Evil Dead still can’t be beaten as a rip-roaring, gross-out hullabalooza. Relentless frights and frivolity juxtapose wildly in this absurd controversy-touter which really must be seen to be believed.
aaaaa
Created by ~ CR@B Howard ~ at 09:53