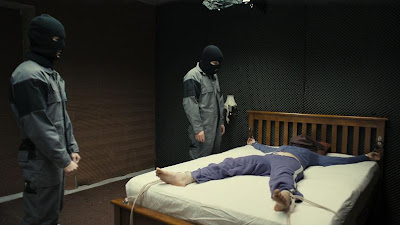 From oily Bond Girl to country slapper, via guardian Goddess and Persian Princess, it's been quite a breakthrough couple of years for Kent-born actress Gemma Arterton, so it was intriguing to see the A-lister who would be Tamara Drewe in a gritty and low key indie thriller – especially one which demanded her to be gagged and tied up for ninety percent of the shoot.

Arterton certainly has a rough ole' time of it as the eponymous victim Alice, bundled into the back of a van and locked away in a makeshift bedroom-come-prison by partners in crime Danny (Martin Compston) and the older and more proficient Vic (Eddie Sherlock Holmes Marsan). No other characters are introduced for the remainder of the film, as the nervy youngster Danny follows meticulous plotter Vic's lead in making calls to demand a ransom and checking up on their distressed captive.

Although the violence isn't tenaciously intense it is at times downright harrowing (particularly when Arterton is cut out of her clothes or made to urinate in a jug, shackled to the bed throughout), with all three players delivering steely performances which you truly believe in.

Sparse and contained though the action may be, The Disappearance of Alice Creed is deceptive in its scope, with the plot constantly evolving as backstory reveals throw up left field twists which cast the characters and their bleak situation into remarkable new light.

That first time auteur J. Blakeson adeptly manages such convolutions without the script feeling forcibly constructed or expositionary is miraculous. For instance, we learn that Danny has been 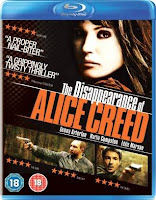 in prison, but we are not sure for what crimes; we are told that Alice hates her multi-millionaire father, but we never discover what aggravated her resentment; while cold-blooded kidnap expert Vic largely remains a mystery until desperation sets in.

Fundamentally, the details are insignificant to the scenario and would only dilute the potency of the mystery (even the location of the flat holding cell is never revealed): characterisation is key here, and Blakeson's effectively drawn out exploration of his limited cast's complex relationships leads to a properly nailbiting spider's web of a thriller.


In a CR@B Shell: Low in key but high in trepidation, writer/director J. Blakeson's debut feature is an impressively executed three way powerplay which intrigues as persistently as it disturbs.
aaaaa
Created by ~ CR@B Howard ~ at 09:40