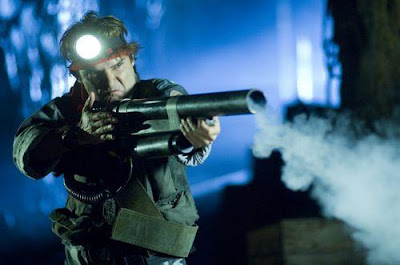 Some 21 years after Kiefer Sutherland headlined Joel Schumacher's vampire/rock/punk classic, 2008 saw the release of Lost Boys: The Tribe. More an updated retread of the iconic original than an all-new story, this belated sequel met with mixed reviews, with many pouring scorn on a film which would dare slander the brilliance of the 1987 touchstone. Personally, I never had a problem with The Tribe, although any film starring The O.C. hottie Autumn Reeser is looked on favourably by this smitten CR@B.

Disgruntled fanboys aside, clearly The Tribe brought in enough moolah for the producers to recognise they had a serious cash cow on their hands, and it was inevitable that another instalment would soon follow. That instalment is Lost Boys: The Thirst, once more bypassing the big screen and released straight to home platforms in time for Halloween 2010. Umm... Yay?

Lifelong vampire hunter and comic book collector Edgar Frog (Feldman) not only returns for a third (s)take, but returns to the fore once more after standing on The Tribe's periphery, with Mr. Feldman signing up as Executive Producer, too. Clearly Corey feels strongly about the future of the franchise which not only launched but sustained his career through the deathly quiet lows, and he even had a creative hand in The Thirst's conception. With such enthusiasm at its core, quite how this threequel turned out to be one of the most ludicrous disappointments I have ever seen is beyond me... 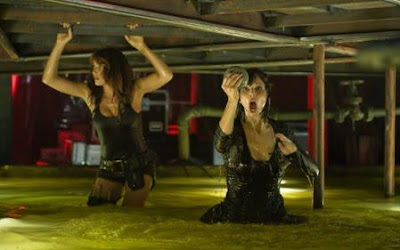 It started so promisingly, too: the film looks great and has plenty of scope. It doesn't skimp on action or locations and even on flaw-enhancing Blu-ray the production values are surprisingly first rate. However, it all too quickly becomes clear that The Thirst is more comedy than horror, with everyone overacting like wide-eyed amateurs and delivering a rut of appallingly cringeworthy one-liners. Alas, Feldman is prime suspect with his nye-unbearable gravelly drawl making Christen Bale's Batman sound like Prince on helium, while Edgar dryly delivers such witticisms as “Vinyl still shreds” after slicing a vamp's neck with a snapped record.

Plum-mouthed Gwen believes youngster Peter has been lured by vampires while at a rave in Ibiza, with DJ X (Castang) and his fanged lackey's distributing the blood of the alpha vampire masked as viles of the eponymous “drug” The Thirst to create a following of subservient half vampires who also know how to have a freakin' good time. Coincidently, DJ X's illegal party is on its way to the sunny beach town of San Cazador, meaning Edgar and his rag-tag cohorts don't have far to go to mash some monsters. 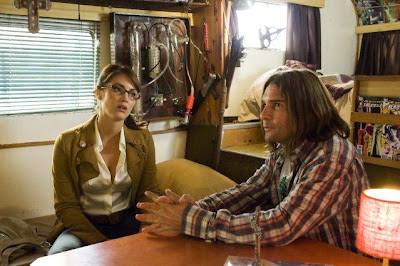 There are plenty of references and callbacks to absent characters from the original film – including an emotional graveyard tribute to recently departed Corey Haim – with director Piana incorporating vital 1987 scenes to great sentimental effect, especially given other Frog brother Alan's (Newlander) hallowed return to the series this time around. Alas, grown up Feldman and Newlander's obvious exhilaration and over-egged banter just comes across as desperate after over a decade in a career nadir.

True, the writers have been brave in pushing The Lost Boys in a new direction here – The Thirst is an original story which homages the past while also looking to the future – but it's a big risk with such a popular property which simply doesn't pay off: the modern-infusion of drug/rave culture just brings back bad memories of concert shots from Queen of the Damned and that much derided scene from The Matrix Reloaded, while the reworking of iconic rock track “Cry Little Sister” squeezed into two high-octane acts evokes a smile which not even an entire film full of techno beats and glow sticks can match.

There are just too many laughable flaws which make you lose interest in the horror at this vampire flick's core. For instance: van Goetz is hired to help save Peter from the undead, but he's so stubbornly certain that they don't exist that even when he and his ever-present cameraman Lars (Vaz) discover Peter sedated and chained up in the underground lair that he walks away, stating it's “too early” in this “roleplaying game” to rescue the teen before he's kicked some emo goth ass first. Y'know, for the camera... 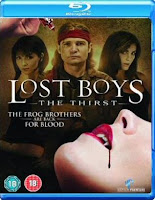 Without ruining the climax for anyone brave enough to sit through the meagre 81 minute run time, my jaw hit the floor in utter disbelief at the frog-jumping, franchise-destroying epilogue tease which is ripped straight out of Lesbian Vampire Killers (seriously) and leaves you wondering exactly what the hell the creative minds being The Thirst were smoking (or drinking)... Watch this dire joke at your peril: The Lost Boys will never be the same again.


In a CR@B Shell: This third entry in the revived vamp-chise looks fang-tastic but lets itself down as soon as any of the dire cast utter a word of the pun-laden script. A lame mockery to the original's legacy which definitely won't leave you thirsting for more.
aaaaa
Created by ~ CR@B Howard ~ at 12:18