Invasion of the Dream Extractors 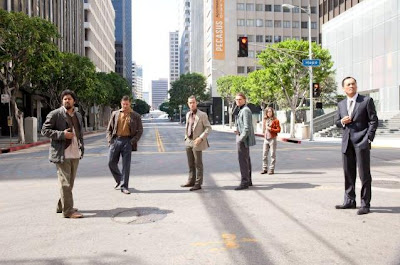 Christopher Nolan certainly likes to have fun bewildering his audience. Whether it's playing with the laws of time (as he did by playing Memento's narrative backwards) or science (real magicians magic-up a parade of clones in The Prestige), you know that every film the Batman Begins director has crafted is an intrinsically constructed labyrinth which requires your full and unwavering attention to journey from the opening titles to the exit sign of the end credits.

His latest mind-bending cinematic experience is no different. Inception delves into the subconscious and makes the indefinite dreamscape its multi-layered, physically unconfined play pen. Streets stretch upwards, stairs are never-ending, trains smash across roads and buildings bend in on themselves in some truly awe-inspiring sequences soundtracked by Han Zimmer's epic synth orchestration – but Inception's substance is equally as impressive as its out-of-this-world style, and nothing is ever included just because it looks cool.

Leonardo DiCaprio plays Dom Cobb, a skilled “extractor” – a spy who can infiltrate other people's dreams to steal their ideas – whose repressed guilt over his tragic past has seen him sacrifice his old life and still threatens to sabotage every new mission he accepts. The 'shade' of his dead wife, Mal (Marion Cotillard), haunts Cobb's mind with vicious intent – can he ever overcome his grief and dream in peace?

Cobb and fellow extractor Arthur (Joseph Gordon-Levitt) are charged with their most difficult case to date: to implant rather than extract an idea into banking heir Robert Fischer's (Cillian Murphy) dreams; an idea which will see their mark dissolve his deceased father's (Pete Postlethwaite) company. In exchange for this act of corporate espionage, their client (Ken Watanabe) offers Cobb carte blanche; he will legally be able to return home and be with his children once more. 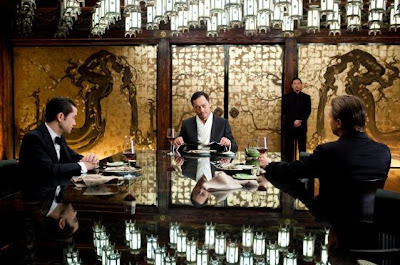 Cobb and Arthur reassemble their team of specialists – including sedative chemist Yusuf (Dileep Rao) and form-changing 'Forger' Eames (Tom Hardy) – whilst simultaneously training student-come-dreamscape 'Architect' Ariadne (Ellen Page). The newcomer's ignorance allows the audience an introduction to the mind-boggling, scientifically bonkers internal logic which holds the film together. It's lazy – but essential – exposition; Ariadne asks all the questions we're silently screaming at the screen, and we completely identify with her initial resistance, but Nolan's creation is just too alluring to resist.

Intercepting Fischer on a ten hour flight, the Extractors connect themselves up to the sedative-administering device and dive straight in to his rain-drenched dreamworld. From herein, Inception becomes a sci-fi heist movie (even the climax is set within an illusory bank vault), with the secondary players (specifically quick-witted Eames) providing light relief from the seriousness of the morally-corrupt mission. Truth be told, beyond assisting in plot formalities and reacting to Cobb's troubled moods as he battles his personal demons, there is little else for the team to do besides banter, but they do it well: granting personalities to these two-dimensional characters.

Although bound to its mechanical constraints, Inception is a technically accomplished epic blockbuster which covers all corners: intelligent, action-packed, visually gorgeous and original. Furthermore, the acting is first rate: Hardy provides a spirited turn bouncing off of Gordon-Levitt with glee, and Page is as plucky as ever, while DiCaprio impressed me just as much as he did in Shutter Island – another film where his intense burdens threaten to defeat him.

Sure, there are some flaws to the logic-disregarding diegesis: people are entering other people's dreams for gawd's sake (and I'm not entirely satisfied with the sudden "oh yeah, you'll be sent to limbo" contrivance, considering for the first hour of the film we were told that to wake from a dream you simply had to be 'killed'. Perhaps a second watch will quell my concerns?), but Inception is such a brave, immaculately constructed, boundary-crumbling vision that you're totally engaged and inspired nonetheless. And besides, when do dreams ever make complete sense?


CR@B Verdict: A refreshingly original imaginarium, Inception requires your full attention as it layers on the internal logic and decorates it with stunningly mindboggling landscapes and exhilarating set-pieces. You may find yourself lost in the dreamworld – but you certainly won't fall asleep. Three cheers for 'Architect' Nolan.
aaaaa
Created by ~ CR@B Howard ~ at 10:21