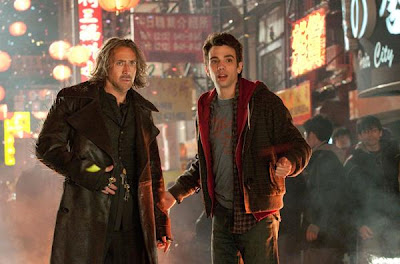 In an industry seemingly bereft of original ideas, where ninety percent of the big-money output is either an adaptation, remake, sequel, prequel or reimagining (Inception the exception which proves the rule), here we have a film inspired by a cartoon, adapted from a lyric, which started life as a poem. Phew.

For the unacquainted, The Sorcerer's Apprentice was originally penned by German poet Goethe waaaaaay back in 1797, before Paul Dukas put it to music a century later and Walt Disney animated it (with a few, ahem, stylistic flourishes) as that mop-dancing sequence in 1940's trippy musical Fantastia.

Misty-eyed over his childhood love of the epic Mickey Mouse opera, it was Hollywood big shot Nicolas Cage's idea to once again bring the source material to the big screen. And here we are today, with an A-list starring, CGI-filled 21st century summer blockbuster from the powerhouse National Treasure trinity of star Cage, director John Turteltaub and über producer Jerry Bruckheimer.

As is the custom with these mythology-steeped extravaganzas, we aren't just thrown head-first into the action but are eased in by means of a vivid, voice-over-guided montage. We are introduced to an ensemble of outlandishly monikered, age-resilient wizards (Balthazar Blake, Maxim Horvath, Morgana Le Fay), a myriad of vital keywords ("Prime Merlinian" – a sorcerer in Merlin's bloodline) and a magical MacGuffin ("Grimhold" – a Russian Doll which traps the spirits of evil magicians). Set in the year 740AD, it's a dizzying prologue which really suffers from exposition overload. 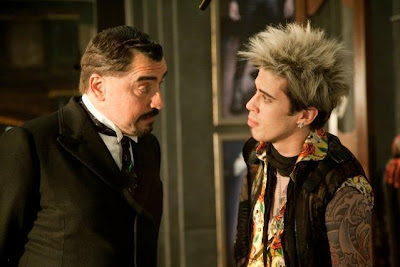 Shoot forward to the present day and destiny has caught up with Balthazar (Cage). Merlin's trusted apprentice is still on his century's long quest for a sorcerer powerful enough to wear a dragon ring and defeat the evil Morgana (Alice Krige) – imprisoned at the centre of the Grimhold – before rogue traitor Horvath (Alfred Molina) can unleash her and bring hell to New York City. Enter timid university psychics geek Dave (Jay Baruchel), whose extreme knowledge of all things molecular and high-voltage means he is the right man for the rubber-soled shoes; the Prime Merlinean.

The remainder of the film's mammoth 148 minute runtime whizzes past in splendidly overt and engaging fashion: Balthazar teaches his nervous new apprentice how to control the elements, while Dave is more interested in controlling the heart of a girl (Teresa Palmer) he embarrassed himself in front of 10 years previous. Meanwhile, Horvath finds himself a vainglorous modern-day TV magic man (Toby Kebbell) to dispence of young Dave and reclaim the Grimhold (you'll get used to hearing that word soon enough).

If you mull things over for too long you'll become bogged down in the overly multifaceted plot, which is further hindered by a deluge of outrageous idioms and the fact that half of the characters are constantly referred to yet remain off-screen until the cosmic final showdown. For instance: Balthazar's love, Veronica (Monica Bellucci), is also trapped inside the Grimhold, having swallowed Morgana's soul in 740AD.

Despite these flaws, The Sorcerer's Apprentice does successfully manage to deliver a fun fantasy experience brimming with some exemplary special effects (a giant steel eagle and a Chinatown parade dragon becoming flesh are two highlights) which don't drown out either the film's humour or heart. It's a winning balance.

I have never been a fan of Nicolas Cage's monotone acting style – he just never seems interested in anything – but I can't really knock his performance here. Perhaps his interest in the source material spurred a more spirited turn from the Face/Off star? Despite remaining off my radar for far too long, imposing Brit actor Alfred Molina is slowly piquing my interest with every sly, underhanded character he plays, while Jay Baruchel simply is a scrawny, nerdy stutterer – though he doesn't hold a magic mop to Mickey.


CR@B Verdict: A loud n' frivolous summer Bruck-buster which will keep all ages amused, if not always clued in to the unnecessarily complex story. Apprentice will struggle to be as iconic as the adaptations which inspired it, but it'll definitely keep you entertained.
aaaaa
Created by ~ CR@B Howard ~ at 11:42