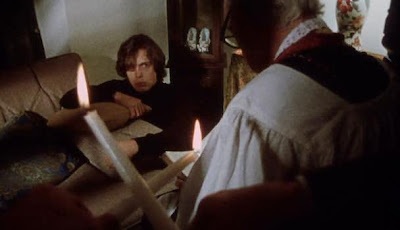 [SPOILERS] Independent horror maestro George A. Romero swaps living dead flesh-eaters for undead blood-suckers in this terrifically kooky slice of 70s horror spliced with teenage drama, which has recently been restored, remastered and re-released on a stunning 2-disc “Immortal Edition” by the committed cult horror aficionados at Arrow Video.

“Vamps and angst,” I hear you cry, “again?!” But before you form any unfair premature opinions, let me reassure you that Martin is a totally different beast to both Twilight (2008) and Let The Right One In (2009). What makes this little known underdog stand out from the pack is its clever subversion of Hollywood conventions, keeping the audience questioning and guessing as to its ambiguous intentions throughout.

The youthful protagonist (John Amplas; eerily effective) is a torridly shy, awkward and alienated lad who just so happens to have a lust for murdering girls and drinking their plasmic juices. But whether you believe Martin really is an 84 year old Nosferatu in need of a soul cleansing exorcism – as his hostile and superstitious uncle, Tada Cuda (Lincoln Maazel) obsessively believes – or just a severely tormented and mentally disturbed teen crying out for attention, is up to you to decide.

Romero's deliriously inconclusive script, coupled with a disorientating editing style, leaves judgement open for multifaceted critiques: Garlic, sunlight and crucifixes have no effect on this fangless monster. Martin is very much a realist tale devoid of hocus pocus and typically overblown vampiric lore: “There is no magic,” as the lead points out. He even requires a needle full of drugs to knock his victims out before stripping them naked and raping them of their blood in two unpleasantly sensual murder scenes. Can anyone say sexually repressed?

Yet conversely, the present day narrative is disrupted by overly theatrical black and white cutaways to Martin in gothic, candlelit scenarios which could easily have been lifted straight out of a 1950s Monster Movie. Romero is eschewing clichéd filmic conventions while drawing attention to his indie production's strangeness – but to what end? Are they stylistic

flashbacks to the vampire's earlier existence, or merely the deluded fantasies of a tormented kid obsessed with B-movies and subjected to the appalling, twisted hokum of his ludicrously crazy family?

Simultaneously unsettling, subdued and tragic, Martin is George A. Romero on top film-making form – and there isn't a zombie in sight. A stunning and radical beast which will confound as many viewers as it enthrals; I guarantee you will be thinking about this curio long after the shockingly abrupt ending. Much like Romero's catalogue of masterpieces, Martin has a disturbing, dualistic quality which invites repeat viewings.


CR@B Verdict: Harrowing, horrific, yet still intrinsically human, Martin is an enthralling psychological portrait of a troubled teen. In typical Romero fashion, populist expectations are subverted into an unorthodox and provoking indie gem.
aaaaa
Created by ~ CR@B Howard ~ at 10:01