Love Hurts (and then you Replay) 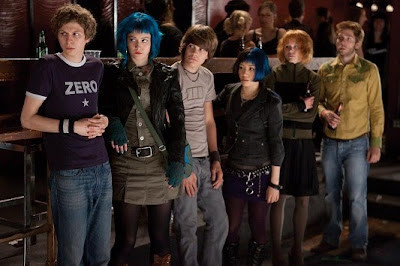 Bryan Lee O’Malley’s comic book adventures of geeky everyman Scott Pilgrim definitely only appeal to a niche audience. Prior to Edgar Hot Fuzz Wright announcing this big screen adaptation, I would guesstimate that even 90% of X-Men aficionados would have drawn a blank at the luckless adventures of the 20-something “Sex Bob-Omb” guitarist.

But then production of this “epic film of epic epicness” has hardly been a closely-guarded secret, and as hype reached fever pitch, so did the anticipation from an ever-growing fanbase. In the weeks leading up to release, it was near-impossible to surf the net without happening upon an exclusive titbit of info, a new poster, interview or a pop-up streaming the trailer. The marketing machine really can’t be faulted: Scott Pilgrim is now a household name. The problem is that anybody who has seen the trailer already knows precisely what to expect on the big screen.

Scott Pilgrim vs. the World essentially is a feature-length extension of the microcosmic teaser; 112 minutes of flashy, hyper-stylised anime and video game in-jokes as weedy and unremarkable Scott (Michael Cera; perfectly cast) has to defeat the league of seven evil exes to win the heart of the crazy-haired, rollerblading girl of his dreams, Ramona Flowers (Mary Elizabeth Winstead; indie cute).

That is it as far as plot goes – it isn’t even totally clear exactly why Scott has to fight his way to victory in a series of Street Fighter style beat ‘em ups – and you’ll know as soon as you see the 8-bit, midi-tone downgrade of the opening Universal logo whether the film is going to hit your buttons or not. Much like the comic, SPvTW is very much a niche film. 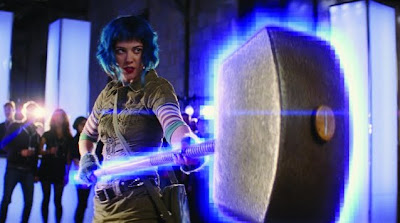 It’s funky and fun – at least for the first 45 minutes – but the stage-by-stage structuring means you are consciously aware of how far through the film you are, and if I’m totally honest, things started to drag a smidge after the fourth “level” kung-fu duel. There are only so many opponents exploding into coins and Final Fantasy-riffing dragon battles you can take before ‘novel’ becomes… samey.

Sure, the CGI is faultless and the humour spunky, but every shot is so busy (every onomatopoeic sound effect is visualised, there’s a pee-bar which depletes when Scott urinates, etcetera) that you soon realise that the film works better in its quieter moments of character interaction. When Brandon Routh’s utterly hideous psychic vegan shows up and starts hitting girls (‘cos he’s a rocker!!!), you start to crave a bit of restraint.

This again highlights another issue which will jar with some (more grounded) viewers: Scott Pilgrim is not set in our world, but its own tweaked hyper-reality where barely anybody raises an eyebrow at a film star (Chris Evans; delightfully cocky) catapulting a kid into a castle wall, or a punk (Satya Bhabha; kooky) dancing in the air with a bevy of demon hipster chicks. This deviance of logic takes the whimsical eccentricities from out of Scott’s mindframe and alters your perception of what is sincere and what matters: even when Scott “dies” you know he’s got another “life” so you barely register any emotion.

Even when Shaun was smacking zombies with a cricket bat you were still 100% behind the lovable loser, but in rising up to the next level in filmmaking (Hollywood), Edgar Wright has gone all out to impress: he’s clearly an idiosyncratic auteur bursting with audacious ideas of which he is passionate, but if he isn’t careful he’ll bury the heart which made us back Shaun beneath an abundance of gimmicky quirks and pixels. Scott Pilgrim vs. the World is by no means a failure (hell, I was sniggering along with the best of them) but it’s clear why this contemporary geek-out hasn’t clicked with audiences the way the money-men expected.


CR@B Verdict: Destined to find its place as a cult hit, Scott Pilgrim is an extreme n’ relentless “ka-pow!” to the senses. A 5* film for the Gameboy generation, but everyone over 35 will be left in need of a power-up and an aspirin.
aaaaa
Created by ~ CR@B Howard ~ at 09:32