When you consider, as the filmmakers point out on one of this newly-restored Special Edition Blu-ray disc's special features, that the Average Joe in 2011 has a more powerful computer in their mobile phone than the entire crew had to work with in bringing this revolutionary digital landscape to life back in 1982, it really makes you marvel at the craft, dedication and imagination that went into conceptualising the iconic geometric cyberspace of Disney's TRON.

Sure, some of the angular effects work looks dated now (particularly the “giant head” of the Master Control Program, or MCP), and it can't visually hold a candle to last year's disappointing-but-dazzling TRON: Legacy (reviewed HERE), but at its cold mechanical heart this was an audacious cautionary parable of man's over-reliance on technology miraculously prophesied in a pre-internet generation when everybody wasn't glued to the web 24/7, poking and tweeting like there's no tomorrow. TRON's premise is so inferential it's scary!

Hopefully without losing you in the techno-babble which clutters writer/director Steven Lisburger's dense script, I'll attempt a synopsis: Computer whizz Flynn (Bridges) hacks his way inside the mainframe of his former employer, software corporation ENCOM, after he is cheated out of fame and fortune by the company's senior exec Ed Dilinger (Warner). Unbeknownst to Flynn, Dilinger's autonomous supercomputer (the aforementioned MCP which continues to grow infinity more powerful than even its creators) is aware of the intrusion and foils Flynn's efforts by de-moleculising the hacker and reconstituting him as digital data inside the mainframe – an electronic world ruled by the dictatorial MCP.

With me so far? Okay: Inside this neon nightmare, the digitized Flynn learns that the computer's programs are all personified by the ENCOM employees who designed them (which makes things *marginally* easier for us to understand, even if everyone does have two names!), and that the MCP and his sardonic henchman, Sark (Warner, again), are forcing these programs to compete in gladiatorial arcade games where the loser is “de-rezzed”; deleted from the system. There's no coming back from that Recycle Bin!!

Teaming up with the eponymous security program designed by his friend and ENCOM employee Alan Bradley (Babylon 5's Boxleitner, who, along with Bridges, made a return three decades later for the sequel) and the virtual alter-ego of Alan's girlfriend Lora (Morgan), Flynn sets out to off-road a lightcycle, obliterate some space invaders, bring down Sark, liberate the mainframe from the MCP's control and return to the real world. Fortunately arcade owner Flynn is a hot shot at computer games, otherwise it would have been a mighty short film!!

Lightyears ahead of its time, TRON must have absolutely blown the minds of its comparatively naïve 1980s audiences. It's little wonder that the film only truly found success as a cult classic in later years. At times even I – and I've already seen the sequel! – struggled to keep up with who was who and what side they were batting for (that's not a euphemism – the digi-duels include a disc throwing equivalent of the classic arcade bat and ball game), not helped by the stylish-but-unvarying flashing blue and black uniforms all the programs wear. 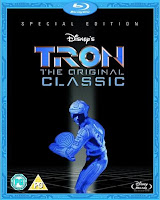 I wasn't enthusiastic about the film's confusing opening which replaced the conventional real-world status quo set-up for an advanced glimpse inside the virtual reality system. Seeing computer programs portrayed by people chatting like they're at the office while they are controlled by “users” playing the arcade games they are acting out is hard to get your head around without any common perspective, even when you know the basic outline of the film! But this was clearly just to prepare us for the journey to come, as after Flynn's matter is transported into molecules, TRON's virtual reality is the status quo until the very last minute of the movie.


In a CR@B Shell: A brave and pain-painstakingly realised vision which, amazingly, is more pertinent today than it was thirty years ago – it's just a pity that TRON gets bogged down in digital detail and techno-babble to such an extent that a simple good versus evil tale is more confounding to decipher than a circuit board. Ultimately and regretfully I found the film to be more admirable than enjoyable.
aaaaa
Created by ~ CR@B Howard ~ at 01:13